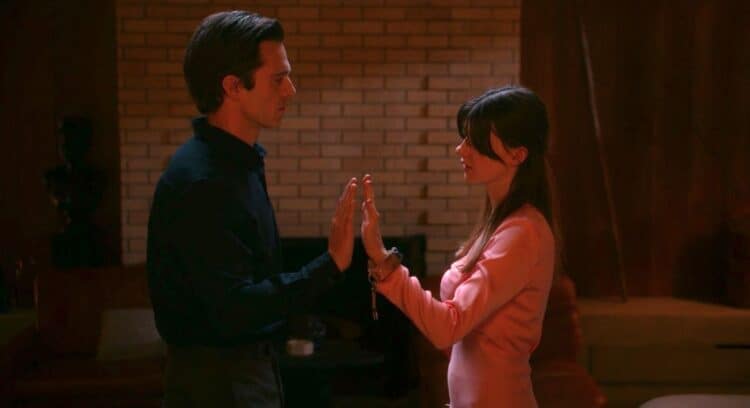 If you’ve been keeping up with Hulu‘s original programming as of late, you’ve no doubt seen an ad or two for fresh. Honestly, I wasn’t sure what to think when I saw the trailers. I’m a Daisy Edgar Jones fan, so of course I was going to watch, but I had no idea where this story was going to go. They purposefully kept the trailers and ads vague, so that when you watch the movie, you’re completely shocked. I wasn’t sure whether to be disgusted, aroused, or scared; and this movie rides the line between those things incredibly well. Beware, I’m going to be diving into all the details of this film, so here’s your obligatory spoiler warning! Now, let’s break this thing down.

So, the first and most obvious thing I need to point out, is the role that Noa’s best friend, Mollie, plays in this. So often, especially in the horror genre, we see the Black best friend getting killed off early on in the story. Hollywood has a habit of making our Black main characters expendable and helpless, but Mollie couldn’t be any further from this stereotype. In the end, Mollie is the reason that Noa survives at all, and she’s the smarter of the two women. Not only does her intellect lead her to saving Noa, her strength and perseverance are the reason the two women survive the final scene. Without Mollie, Noa would’ve been as good as dead, and it’s nice to see that the real hero of this story is an iconic Black queen who saves her helpless white friend (a direct callout to the ‘white savior’ complex). fresh takes this ancient and derogatory trope, and flips it on its head.

Here’s what I really love about this movie; Steve is presented as the dream man, a woke king, who respects women and is bashful and awkward. This movie highlights the fact that women, especially those who engage in relationships with men, are in constant danger. While some may say, “Not all men are like that.”, fresh shows us that we have no way of knowing that. Even the men who seem to be feminists and champions for women/women’s rights, could be wolves in sheep’s clothing. Every time we, as women, engage with men, we are taking a chance on danger. You’re drawn to Steve’s personality, how he seems to be the perfect man, and even intelligent women (like Noa) can fall victim to his games. You trust him, that’s the whole point. For women, danger is lurking around every corner that a man stands on, and this movie shows that we will never truly know if a man is trustworthy or not. We are expected to take the gamble, and give men the benefit of the doubt; even when this can lead to our own demise. Also, not to mention, even the ‘good guys’ (like the bartender), don’t always act or speak when they need to. They’re just as accountable for the violence women face as the men who inflict it.

We all know the iconic line that I’m referencing; when Mollie is plunging a shovel deep into Steve’s wife’s head. She represents a very specific type of woman, one that goes along with the patriarchy and follows the rules that men have set out for women. In order to survive, women like her do what they have to do, even if that means supporting a system that hurts other women. Immediately, after the wife finds Steve dead, she takes advantage of the situation, ready to make money off his body and continue the cannibalistic ruse. It’s revealed that the real villain of this story is her; a woman who supports the system that literally kills other women. Even when she’s been wronged and hurt by that same system (as we see with her prosthetic leg), she’s so brainwashed and conditioned by Steve’s manipulation, that she doesn’t care. She commits her life to Steve, even when he’s done terrible things to her; because that’s the only way she sees her ability to survive. It’s an important concept, referencing all the women in the world who support anti-feminist ideals and don’t stand up for other women; how they’re the real villains of the story.

Here’s what I’ll say about this movie; it is sickeningly graphic. It’s important to the narrative that we’re shown this kind of gore and horror; especially at the end of the movie. We all know what scene I’m talking about. Noa literally bites off this man’s *ahem* prize possession. It’s remarkably graphic, with Steve letting out a blood-curdling scream and Noa with blood smeared all over her face. Here’s why it’s important–so often in feminist narratives, even when the woman wins at the end (at the expense of the man in the situation), it’s sanitized as to not incite too much hate towards the woman’s character. Usually, women are shown taking the ‘high road’ in these situations, besting the man with intelligence or empathy. Noa is completely different. This movie shows that women are just as capable of horrific and graphic violence as men are, and doesn’t shy away from the fact that what Noa does is down-right barbaric. This story doesn’t care how you feel about Noa’s decision, and gives Steve a taste of his own medicine in a really poetic way. It showcases that, when we’re pushed to our absolute limits and manipulated in a way that takes away our autonomy, women aren’t afraid to get just as hateful and physical as men. Not only are we capable, we are justified; even when society tells us otherwise.

This movie really resonated with me, and truly felt like something I’d never seen before; something the world hasn’t seen before. I’m kind of surprised that people aren’t making more noise about this film, as it addresses some huge social concepts with nuance and confidence. Noa and Mollie are feminist icons of the future, showing that not every Black best friend has to die, not every beautiful white woman is infallible, not every woman who says she’s standing with other women actually does so, and not every man who seems to be a good guy is really that good of a guy. It’s a direct reflection of the world we live in, separating the true feminists from the performative ones. Make no mistake, if you had a problem with Noa’s ending, with the way that she hurt Steve, you don’t have a problem with her character, you have a problem with women being allowed the same license that men have when it comes to violence. If you’re upset that Steve’s wife was killed at the end, then you missed the point of her character. And if you don’t think Mollie is the real hero of this story, you clearly were watching a different movie than I was.