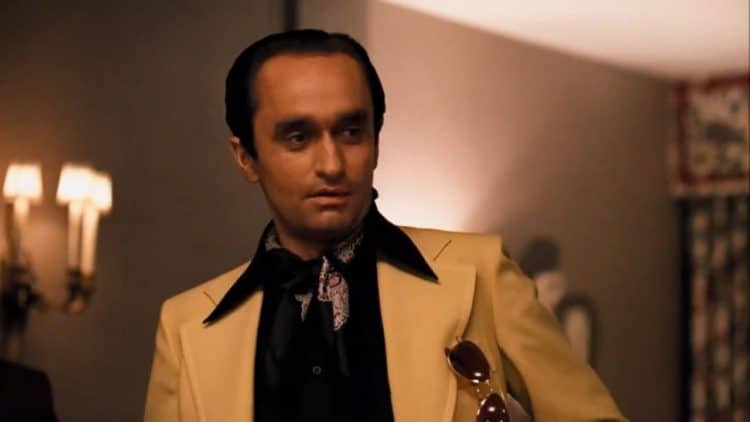 Let’s jump ahead real quick and state how Moe Green’s ability to snap Fredo Corleone into shape might have been great and had a long-lasting effect that would have done a world of good and made Fredo a confident individual. It’s true, the ass-kicking method that Moe used could have worked, had he known better than to do such a thing in the open, where everyone could see it, and where public humiliation forced Fredo to step up when in front of others, but be compliant in private. Granted, this isn’t how things were done back in those days. If a person screwed up then they were taken to task for it, right then and there. Of course, that depends on the methods used by the individual, and Moe Green was obviously someone that wasn’t going to waste time taking Fredo aside to bust him for his shortcomings. Let’s lay it all out, Fredo was a weak character, whether it was due to coddling or it was just a part of his nature. He had skills that he could rely on, but on his own, Fredo wasn’t the type to stand up and get things done.

It was made quite evident from the start that Fredo was a Corleone, but he was allowed to be sloppy, less than effective, and wasn’t given the same type of consideration that his siblings were given. In other words, it felt like Fredo was more of a screw-up than the others, as Sonny was meant to take over the family business as the eldest, Michael was favorite, and Connie, as the only daughter, was a treasure and was even more spoiled than Fredo had ever been. Fredo was kind of an afterthought and as sad as this sounds, it feels like the unvarnished truth. But his weakness was something he was born with, both physically, emotionally, and psychologically. During the second movie, one can’t help but see how this continues to develop as the many ways that Fredo fails as a character are highlighted throughout the movie.

Thinking that he was upset about being stepped over when it came to being godfather is valid enough, but as much as Don Corleone loved his son, he knew that Fredo didn’t have the physical or mental toughness that Michael possessed. Even Sonny wasn’t strong enough to be a good don since his massive anger issues kept him from being a reasonable human being. And there’s not a lot of chance that Connie would have been able to take over the family business since until the third movie she was kind of a mess. But in the end, pretty much everyone was stronger than Fredo as a character, since while he did possess skills when it came to dealing with people, Fredo was a weak-minded individual who would crumble under the slightest bit of pressure, and everyone around him knew this. That was why his family sent him away after the killings in the first movie, and why Moe Green felt that he could whip Fredo into shape with impunity. He was a Corleone without a doubt, even in the wild, weak members of a pack are either tucked up and protected, but not depended on for much of anything, or they’re left to their own devices to see what will happen.

Luckily for Fredo, his family kept him safe and allowed him to do what he wanted, but when given the chance to do the right thing and protect his family, even if it meant his death, Fredo decided to take the easy way out and try to get a little something that he could call his own. It’s easy to understand the need for such things, as being part of a big family where one is taken care of and might want for nothing can still become bothersome. The need for independence is something that many people can understand, but where Fredo screwed up was thinking that he’d be a free man, when in truth he would have been in the pocket of Hyman Roth, and well removed from the protection of his family. Strangely enough, he was better off being a weak character in the Corleone family than being his own man.

Was Fredo’s killing justified? Yes, and no. The affirmative is easy enough to understand since Fredo had betrayed his family, and there was nothing to say that he wouldn’t do it again, no matter that he was a broken-down version of himself by the time his end came around. But it’s easy to say that no, it wasn’t justified since there were ways to simply make Fredo go away, and possibly keep him regulated/monitored, and still kept comfortable, far away from the family. And there was even the option of giving him something that wasn’t too important but would be all his.