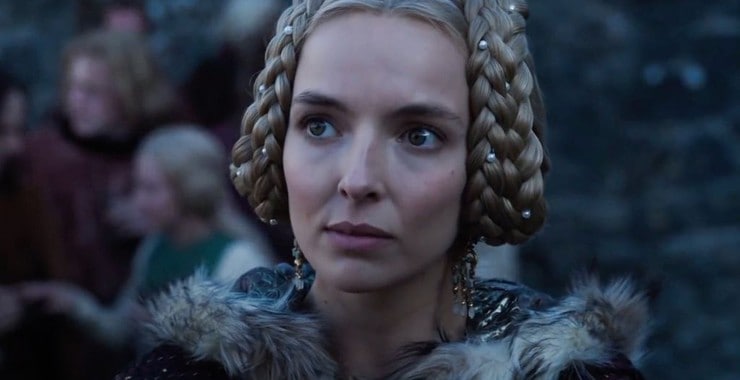 Talking about a movie based on what the critics say about it is a little too easy, which is why watching a movie and then giving an account of it from personal bias or from simply trying to ascertain if the bias of others was accurate or a bit skewed. After watching The Last Duel, it’s not hard at all to say that Ridley Scott has little call railing at moviegoers and their cell phones, especially since he essentially made a movie concerning the vanity of two men and the undeniable plight of women centuries ago. When the determination of guilt or innocence was left to God and not to evidence or anything approaching logic (a woman can’t get pregnant from rape is one of the most ridiculous things to think about ), it’s easy to think that as evolved as people might believe they were back then, things were still far from civilized. In essence, this movie is about the feud between two men and their need to be right, even at the cost of the woman they both profess to love.

The fact that it goes through three different points of view is kind of interesting, but it becomes a little too easy to dislike pretty everyone except for Marguerite early on in the movie since everyone else is either incredibly vain, willfully blind, or just plain nasty in one way or another. Jean de Carrouges, played by Damon, is a man that has seen many battles and often seeks to do what he considers to be the right thing but ends up proving that he’s more than a little conceited and needs everyone to play to his ego as much as possible, especially his wife. Jacque Les Gris, played by Adam Driver, is a known womanizer and friend of Jean, but it becomes clear that as much as the two men have shared in their lives, Les Gris has been favored by their Lord, Count Pierre d’Alencon, who is played by Ben Affleck.

The story is essentially one giant tale of vanity and how many problems it can bring as the Count’s favor continues to drive a wedge that was already forming between Jean and Jacques, as the two men had already been at odds following a military campaign that was a failure thanks to Jean’s need to be the hero and Jacque’s inability to let his friend get killed for being too rash. Both men are known as heroes and capable fighters, but their personal issues are enough to drive them apart as Jacques is made captain, a position that Jean’s father and grandfather held and that he had planned to hold. The Count, on the other hand, is more interested in someone that he can ply with his words and someone that will follow him without question. Jacques does put up a bit of fight, but not much when it comes to how Jean is treated by the Count. His love for Marguerite, twisted as it is, helps to strike the final blow that forces Jean and Jacques to part ways. But when Jean returns home after one campaign and is told by Marguerite that she was raped by Les Gris, the response isn’t what a lot of people might have hoped for.

From Jean’s perspective, it was he who was wronged, as Jean believes that Jacques can’t stop doing evil things to him, as Jacques was already given land that was meant to be part of Marguerite’s father’s dowry to him before their marriage. Jacques took his position as captain, and then took his wife by force, which makes things even worse. But then again, it only continues to get worse since Les Gris denies that the rape ever took place, and is of the mind that what they did was entirely consensual. When the duel is first mentioned, many people want no part of it since if Jean lost, Marguerite’s life, and the life of her unborn child, would be forfeit. The reliance upon God deciding the outcome feels extremely antiquated, even for this time, and even more, the movie makes it clear that men were to be obeyed and women were to do as they were told. It’s kind of an odd theme in an extremely woke era.

To be fair, it wasn’t all bad. The action scenes were kind of interesting and there were a few moments here and there when the movie was easy to watch. But trying to enjoy a tale that speaks to the vanity of two arrogant individuals and the attitude toward rape is kind of tough since it needs to be said that this period was incredibly rough for women, even it was a little eye-opening. But overall, The Last Duel kind of deserved the treatment it received from the audience.