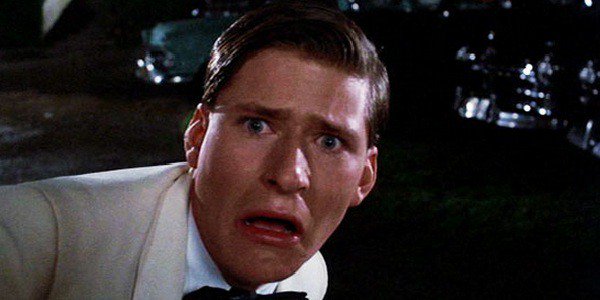 Jeremy Dick of MovieWeb has the right of it in claiming that no one but Crispin Glover could have possibly played the part of George McFly in Back to the Future as he turned in a role that was absolutely perfect. He played the part of the wimpy, kind of geeky kid in school that sticks to himself a lot and is easy to pick on as the town bully, Biff, shows more than once throughout the movie. Even in the present time the two have maintained their same roles as George still gives into Biff as an adult, preferring not to cause a confrontation after decades of ridicule. But there’s a big reason why we never got the chance to see him again after the first movie, and why he won’t ever come to a reunion with the others from the movie, and it has to do with a feud that’s been going on since the movie first released. Three decades seems like a long time to hold a grudge, but some people can hold onto ill feelings without fail.

The grudge in question is being held by Glover since it would seem that Bob Gale might not care as much at this point. Glover however is still fairly incensed about the fact that Gale is, as he’s said, a liar and someone that he can’t stand to be around. A lot of it stems from what happened in Back to the Future II, when Glover reportedly didn’t want to be in the movie and a stand-in was found for the part of Grandpa McFly. The upside for the fans was that we got to see an aged version of George McFly, while the downside for the studio was that thanks to using his likeness, they were sued by Glover as a result. What a lot of people, including Eriq Gardener of The Hollywood Reporter, have noted was that Crispin didn’t care for the script and demanded a $1 million dollar contract to show up, which was a lot more than the lead, Michael J. Fox, was making at the time. The studio obviously rejected this and went on to use their own actor with a facial prosthetic designed to look like Crispin. Unfortunately for them this matter wasn’t going to be dropped and in the end it did result in a settlement that some might say sets a dangerous precedent, but others might claim is only right since the actors that go on screen are right to want to protect their likeness.

In any case, it soured Crispin for the experience and as Simon Brew of Den of Geek! would  agree with it’s big reason why he hasn’t been a part of the Back to the Future franchise ever since considering that he was so greatly incensed by the studio’s decision to put another person in his place while trying to pretend that he’d actually taken the part. Jeffery Weissman, the actor who played the role of George McFly in the second movie, actually went to Glover at one point and said that he was uncomfortable with the role, as he reported that people on the set were joking around and even starting to call him Crispin. You can imagine that didn’t sit well either since honestly it seems a little insulting and might even be taken as a taunt by the more paranoid among us. In any light however it didn’t seem right and had the studio simply cast another actor that looked like Crispin they might have avoided this entire mess, and he might have still considered coming back for the reunion a time or two. After all, the movies switched out Marty’s girlfriend from the first to second movie, why in the world couldn’t they do the same thing for George? The level of pettiness on both sides seems to have no end as Glover to this day will still go on about how his dislike and possible hatred for Bob Gale is what’s keeping him from setting foot near any mention of attending a reunion, which is kind of sad on one hand and worth an eye roll on the other.

This is more proof that the level of pettiness in Hollywood is not only alive and kicking, but that it’s simply too much at times not to laugh at. If you can imagine a bunch of kids squabbling over this or that and thinking that the arguments they’re making seem groundbreaking and worth being so dramatic about then you might get a good picture of what it’s like in show business at times. Thankfully the entire landscape isn’t in this kind of shape, but as you might guess, the news we prefer tends to be that which is rife with conflict and is easily swept aside when we’re done with it. Sorry Crispin, but you did get your settlement, so maybe now would be a good time to at least say hey to your former costars and attend a reunion.