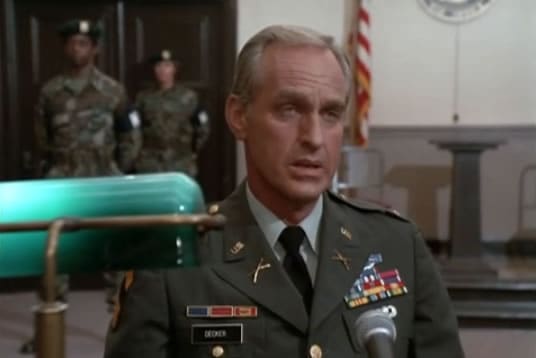 There were a few individuals that could trouble the infamous A-Team back in the day, but Colonel Decker was one of those that managed to make it look like a pleasure at times, even if he wasn’t exactly a cheerful person. But the fact that he knew Hannibal from before the formation of the team kind of gave him an edge since he’d seen Hannibal operate in the past, and knew that the leader of the A-Team usually had something up his sleeve. It didn’t really help Decker, but it made him a little more experienced in dealing with someone that could take an impossible situation and turn it into a win. The thing about Decker is that he was tasked with bringing the team in, considering that they were fugitives from justice and were sought after by the military. It would appear that there aren’t enough good deeds a person can do to avoid the justice that some seek so badly, and bringing in another individual from the military proved to be one of the best options. To be fair though, despite the fact that Decker was a little more qualified, he was still out of his league.

The fact that he went by the idea that there were no rules wasn’t really out of character for Decker since he was a troubleshooter for the military, meaning he took care of any ‘problems’ that he was directed toward and didn’t really have much of a problem taking out civilians at the same time. Where the A-Team was there to help people and hopefully do as little damage as possible, Decker was a battering ram that was doing his best to do the US military’s bidding, meaning they didn’t care about results so long as he brought them down. This really pushes the idea that the military created the monsters they came to abhor as well as the heroes and would vilify the heroes while setting the monsters loose to bring them down.

A lot of people might want to say that this isn’t the case but this has been seen more than once in movies and TV shows over the years, a view on the military that they create the killers and later on have to figure out what to do with them. Those that have served or are serving in one branch of the military or another might take a little offense at such a character, while some might not. The fact is that the military doesn’t just train killers, but it does teach those that enlist how to survive, how to kill, if necessary, and how to follow orders, and Decker was capable of all three and more. This character was one of those that was far worse than someone that’s been taught to kill and can’t shut the impulse off, he’s the kind of monster that can be created and can be taught how to do it without feeling an ounce of pity or sorrow for what he’s done. Sadly, that’s the kind of person that would be needed in a story such as this to go after a group of individuals such as the A-Team, since just sending anyone wouldn’t work.

The ideas that we have about one facet of life or another are often mirrored in the entertainment we enjoy and either blown out of proportion in order to soften the otherwise heavy sting that might come with such representation, or they’re spot on and aren’t suited for every last person to watch. The idea that the government, or rather the military, could create someone like Decker is unfortunately far too easy to see as a reality since the idea of war and everything that comes with it, good and bad, is something that shapes people in ways that a lot of us can’t fully understand, but might have seen or experienced vicariously through those that have been there and been through it. Decker was the type of character that did what the military told him to and was infuriated that his progression through the ranks was stymied by the fact that he was denied any further upward movement due to the actions he committed. Keep in mind, these were the same actions that the military ordered him to do, which means that by doing his job he became an undesirable character that was used when needed and chucked to the side when his services were no longer required.

In this manner, it feels as though Decker was someone that is a little pitiful since he couldn’t break out of the cycle that his actions forced him into, but he was also a monster that had been created by the same people he served. As far as being the worst character on the show, he was more or less a product of the system he bought into.