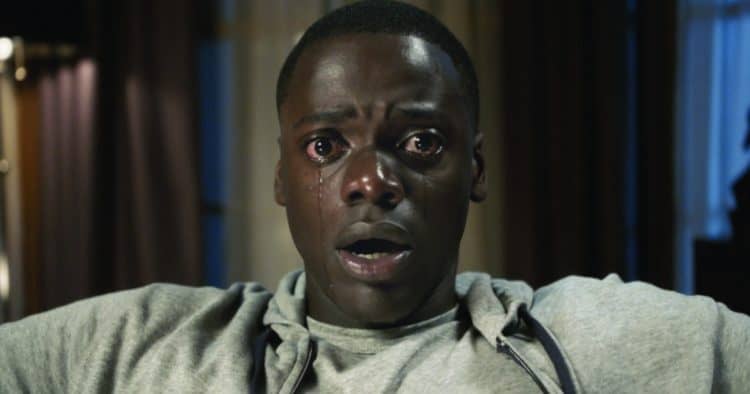 When Get Out burst onto the scene back in 2017, it was immediately a huge hit amongst critics and audiences. Get Out tapped into something rarely seen in horror: racism. But it wasn’t just the topic of racism that got audiences buzzing about the Jordan Peele vehicle, it was a well-crafted horror feature that has compelling characters and a straightforward and intriguing narrative. More importantly, it was a horror movie that wasn’t just focused on delivering guts and gore, which has been a main staple for the genre for so long. However, Get Out has its faults, one of them is almost ruined the great film. That scene is when it’s revealed that Rose was playing Chris all along. The two try to escape the house, but Jeremy is blocking the door. Rose “struggles” to find the keys throughout the entire scene as the other family members gang up on her boyfriend. Chris eventually figures out that Rose is a part of the whole ordeal after Dean’s “what’s your purpose” speech, and Rose reveals her true colors seconds later. Now, this scene is masterfully directed. Bradley Whitford and Caleb Landry Jones are effectively creepy and the whole play of Rose having a hard time finding her keys was well done. The problem is that we knew Rose was a double agent minutes before the scene started. That goes back to the moment Chris discovered Rose’s pictures with all her ex-boyfriends.

Get Out does a solid job of establishing Chris’s character beforehand. The key thing is that Chris is never portrayed as an idiot throughout the film. Of course, plenty of suspicious things has happened during Chris’s stay thus far. There’s an eerily vibe about Walter and Georgina, and that incident where a reported missing Andrew is shouting for him to get out multiple times. However, Peele carefully pens the situation that doesn’t make Chris look naive or stupid. On the other hand, the discovery of Rose’s past boyfriends who happen to be all black should’ve been a massive red flag for the character itself. Chris is definitely suspicious of Rose, but it’s odd that he fully trusts her enough at this point. I do understand that love is blind. In reality, you don’t want to assume the worse out of someone you’ve been very intimate with for a lengthy period. I understand why Chris doesn’t instantly jump to a conclusion that something isn’t right with Rose. But it’s bafflingly that he doesn’t at least test her to see where her loyalties lie. Rose was obviously never going to tell him the truth straight-up, but Chris should’ve questioned her about those weird pictures.

Why does she own so many pictures of her Black ex boyfriends? Hell, why has Rose never mentioned that she’s previously dated Black men? There should’ve been some attempt from Chris to get answers in regard to what’s going on. Or better yet, Chris should’ve cancelled his plans to leave so soon and wait until everyone was asleep and then tried to leave. Or, perhaps Chris and Rose could’ve left the house together, but a trap is waiting for him as he’s trying to escape. We as an audience know that Rose is no good, it’s a shame that Peele isn’t two steps ahead by playing with that notion. Rose’s double cross reveal doesn’t work because of this. What could’ve come across as a truly shocking moment made Chris look like an idiot in hindsight. He’s not portrayed as some lovestruck buffoon who doesn’t believe that his woman could do no wrong. He knows something is up, which is all the more disappointing that he keeps expecting her to find the keys until the very end. This moment felt as if Peele couldn’t find a better way to write this scene, so he pulled a dumb horror movie moment by betraying the intelligence of Chris in favor of a less effective reveal. It takes you out of the moment because you’re rooting for Chris to get the hell out of that house but scratching your head as to why it’s taken him so long to piece two-and-two together when it comes to Rose. Thankfully, it doesn’t completely kill Chris’s character and it’s not hard to get back on his side as the film progresses. Get Out is still a good film. In fact, I would consider it one of the top horror movies to come out within the past ten years. Had Peele’s script been a bit smarter though then this would’ve been a fantastic film.