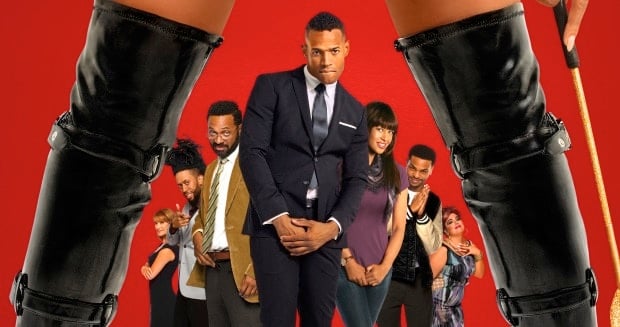 Not surprisingly, a parody of the 50 Shades of Grey trilogy was made, and let’s be honest, that franchise is ripe for a spoof. Whether it’s the horrid dialogue, the unbelievable and toxic relationship between Christian Grey and Anastasia Steele, the random storyline of the “stalker” in part two or the insane boss in part three, and the bland vanilla sex, there’s some much to chew on that it should be easy for a film to parody those films, right? Well…50 Shades of Black happened. The film came out in 2020 and it’s a Marlon Wayans special. The writer/actor is no stranger to parody films, with Scary Movie and A Haunted House under his belt.

Scary Movie is far from the greatest parody ever made, but it’s definitely Wayans best. The comedic is able to take a lot of the classic horror movie tropes and turn it into a funny situation. Scary Movie can be hit-or-miss, with the film diving into low-brow humor like dick jokes; however, it serves its purpose by the end of it. A Haunted House mocks the Paranormal Activity franchise and like Scary Movie, it’s very hit-and-Miss, though the bad outweighs the good. A Haunted House really highlights the issues with most Marlon Wayans comedies. First, before I trash his fellow movies, Marlon Wayans is indeed a talented actor. The veteran has displayed his talents in Requiem for a Dream, On the Rocks, and Respect; however, Wayans’ scope when writing comedy is extremely limited and desperate.

The main issue with Wayans brand of comedy is that it tends to be random, low-brow, and easy humor. Granted, there are times where low-brow humor can make someone laugh. However, Wayans brand of humor grows especially tiresome as the years move along. For example, A Haunted House uses a dog being randomly run over as comedy. Or obsessive farting and poop jokes. Let’s not forget the laziest gay stereotypes and sexual assault humor. While these jokes can pull a laugh out of you every now and then, when you continue to the beat audience’s head with this type of humor throughout the entire runtime then it showcases the filmmaker’s lack of knowledge for the material. Instead of playing off the found footage genre, Wayans returned back to his brand of comedy that fails to give any insight on the genre he’s mocking, and it only highlights his problems with his type of style.

This style is pretty much what 50 Shades of Black is. There’s no subtly in the jokes, nor is there any genius behind them. Wayans throws everything at the wall to see what sticks. There’s even an unnecessary Whiplashand Magic Mike gag in there. The best parodies are the ones that can mock film tropes, but still, stand as their own movie. Airplane is a classic example of this. The film takes aim at serious disaster films but is able to stand on its own because of the original story that allows its wacky characters and storylines to shine. 50 Shades of Black is essentially a carbon copy of 50 Shades of Grey. Had the film been actually funny and add some commentary on the core issues of the franchise, then Wayans could’ve got away with this. Instead, 50 Shades of Black plods along under Wayans’ signature brand of humor. The movie never justifies its existence because it doesn’t add anything to the conversation.

Obviously, I didn’t expect some deep or thought-provoking piece that explored the characters of 50 Shades of Grey, but the film feels silly and often mean-spirited because it can. Like I said, every now and then, one of Wayans’ jokes will get a laugh from you. However, that isn’t due to the fact that he has an insightful or clever take on the crap known as 50 Shades of Grey. If you throw everything at the wall, eventually something will stick. As much as I’m bashing the film, some of the actors do give it their all. Unfortunately, they’re hammered by a script that refuses to be anything other than stupid. 50 Shades of Black could’ve taken a swipe about the dating market, namely women choosing to date toxic men or “bad boys” over genuine good guys. Or, this could’ve been a commentary on how money and power can make people overlook certain behaviors. There’s so much content that 50 Shades could’ve touched on that it’s disappointing that it feels like a lazy retread of the movie it’s spoofing. As previously stated, there’s nothing wrong with low-brow humor. Comedy is subjective, so what people find entertaining varies. However, a bad movie is a bad movie. Unfortunately, that’s the category 50 Shades of Black lands itself in.