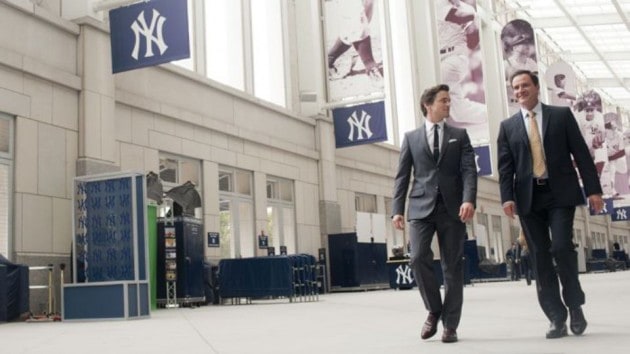 Peter goes down Memory Lane in this episode of White Collar as a baseball-related heist is about to go down. A legendary contract thief named Gordon Taylor is planning to rob the Yankees Museum of Babe Ruth’s first home run ball for a rich hotel heir named Robert Withrow Jr.. Mozzie has already signed up for the job, while Neal, on the other hand, has to go through a game of pool with Taylor as his “interview.” I was impressed to see Neal make that trick corner shot to get the eight-ball into the corner pocket. I’m guessing that Matt Bomer had to do quite a lot of those when filming the scene to get the shot just right.

Coming back to Peter, it’s nice to see him re-live his childhood memories, and I was as shocked as Neal was when I learned that Peter actually played professional baseball until he had to stop playing due to a shoulder injury, in which his rotator cuff was thrown out. The doctors were able to repair it, but if Peter were to continue playing baseball, then he would destroy his arm for good. Makes me glad that he didn’t continue playing the sport, because as Peter says, he would’ve never passed the FBI’s physical exam, and he would’ve never caught Neal.

I also agreed with Peter when he debated with Neal that baseball is just as much of an art form as actual art, and that it has a place, time, and emotion that goes with it. It gives us fans something to root for and to forget the tough times that we’ve had in our lives. Like for me, I am an L.A. Lakers fan, and though I know nothing about the statistics, I still enjoy watching the games on TV and cheer as loud as I can when a player makes a really good shot, or if the team wins the game.

The one thing that I felt was a little off in the heist scene was when one of the thieves broke the glass case containing the priceless baseball. I mean, they could’ve made the guy feel frustrated or something so that he would break the case out of rage instead of standing in front of the case and just smashing it for no apparent reason. Other than that, the scene was flawless, and kudos to Peter for figuring out that the baseball in the case (after it has been switched out by Neal) was not the real ball and for also figuring out that Neal had sent him a message about the drop-point, in which the real ball would be handed off to Withrow Jr. in the fake ball. Withrow Jr. was apprehended in the end along with another thief and Mozzie, who was released afterwards.

When Neal handed Peter his rookie baseball player card when Peter came to see him about the code that he incorporated in his letters to Kate, it brought a smile to my face that Neal was able to find the card. My smile got wider when Neal took Peter to Yankees Stadium, and the two of them threw a ball around with the song “I Go To Work” by Kool Moe Dee playing in the background. However, I have a sinking feeling that Neal might not be able to get his sentence commuted if Agent Kramer and his people figure out the code in his letters to his late girlfriend. Let’s hope I’m wrong.