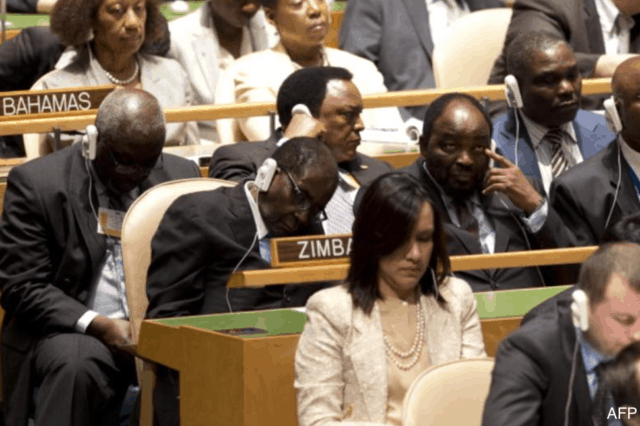 I’m 38-years-old and I can safely say if you put a bed in front of me and give me 10 minutes I can fall asleep at any time of day and in nearly any setting.  What it’ll be like when I’m in my 70s or even 80s is something I cannot even fathom.  I mention this because imagine being an old man and having to see through an experience similar to what I can only compare to a DMV meeting.  The President of Zimbabwe has been in the news lately because he was caught sleeping at United Nations meetings.   According to BBC

Zimbabwean President Robert Mugabe’s spokesman has hit back at critics who accuse him of being asleep at public events when his eyes appear to be closed, saying the 93 year old is in fact protecting them from bright lights. George Charamba was quoted by the state-owned Herald newspaper as saying that Mr Mugabe travels regularly to Singapore to receive specialised treatment for an eye condition. He added that “the rest of his body gets attended to” in Zimbabwe by a physician who is not only Zimbabwean but “is actually black”.