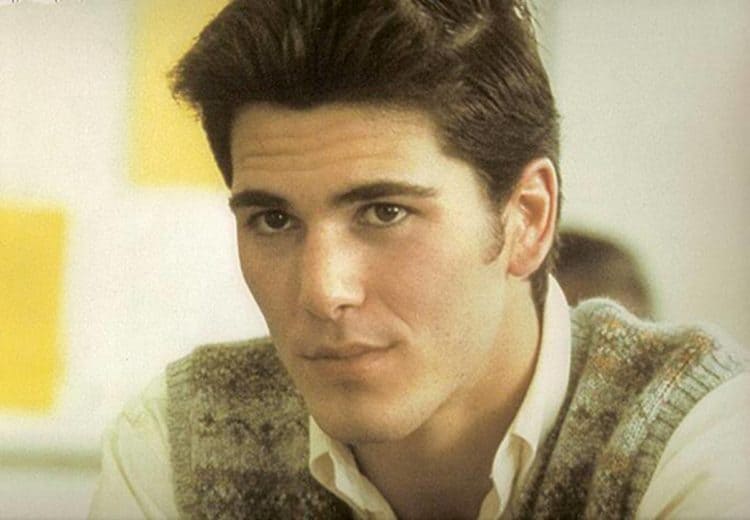 It has to be said that Michael Schoeffling was one of the biggest hunks of the 1980s, and it has been said in fact since he was one of the more noticeable individuals of the decade given that he was in a couple of the most notable movies. Of course one of those was Sixteen Candles as Jake Ryan, the sensitive but super-popular senior that has a thing for Molly Ringwald’s character Samantha, who had a major crush on him. The only issue of course was that Jake was hooked up with a fellow senior, a young woman that was thought to be perfect in every way but was kind of less than perfect when it came to her attitude and the careless way that she and the rest of the class trashed Jake’s house. It’s also enough to tarnish his reputation when we take a close look at the movie as so many have done by now and realize just how many ‘wrong’ aspects there are throughout its entirety. The truth is that the movie was made in a different era despite the fact that some of the ideas so prevalent back then horrify people now. A lot of folks don’t want to hear ‘different era’ but will gladly turn a blind eye to things that are beyond nuts in today’s cinema. Funny how that works isn’t it?

Anyway, Michael was obviously well known for this one role, but it wasn’t his only one since he did show up in a handful of movies between the beginning and end of his run in Hollywood. By the time the 90s hit though he was likely already thinking of getting out since by 1991 he decided to step away and take care of his family. Apparently he took up his own woodworking shop and started producing handcrafted furniture, and for all intents and purposes it’s served him well since we haven’t seen hide nor hair of him on the screen since. He also cited a lack of roles that were available to him which is kind of an odd statement for someone that was seen as so popular in the 80s, but given the fact that he had a young family to look after and might not have wanted the pressure of going without seeing his kids for so long it could have been that he made the best decision of his life in walking away. But thinking that there were no available roles is kind of tough to swallow since a lot of 80s actors did manage to hang on for a while and find other roles that suited them or could at least keep their careers stabilized until they found something that would keep them going for a while yet.

It’s kind of funny to think that he was in his early 20s when he took on the part of Jake Ryan, so one has to think of how old Molly Ringwald was back then. When you realize she was 15 it’s enough to make your eyes pop out of your head a bit since she and Jake were meant to have that final kiss at the end, something which should by all rights infuriate people in this day and age. But hey, we’ve got movies where that kind of thing is now seen as ‘art’ so the past might actually be safe given that it was fairly innocent in many ways and not meant to be disturbing at all. It’s also enough to note that in his time Michael was a superb wrestler that won awards for his time on the mat and he actually had to dial it down in Vision Quest in which he starred with Matthew Modine. That might have been a slight hit to the old pride and dignity but it was also a paycheck at the time and something that Michael might have done since he was more interested in being a part of the movie than allowing his pride to hinder him. After all he wouldn’t be the first individual in movie history to do so.

In stepping away though he might have done himself a big favor as the movies changed so much after the 80s that a lot of people he shared the decade with weren’t really the same afterward and a good number of them didn’t manage to hang in there all that well. Getting out and finding his own path might have actually been the best decision since to this day it sounds as though it’s allowed him to do what he wants and be satisfied in a job that he’s likely come to care a great deal about. As far as appearance he’s changed just as much as anyone considering that he’s well into his 50s now and isn’t quite the same hunk that people remember. But hey, that’s what movies are for.