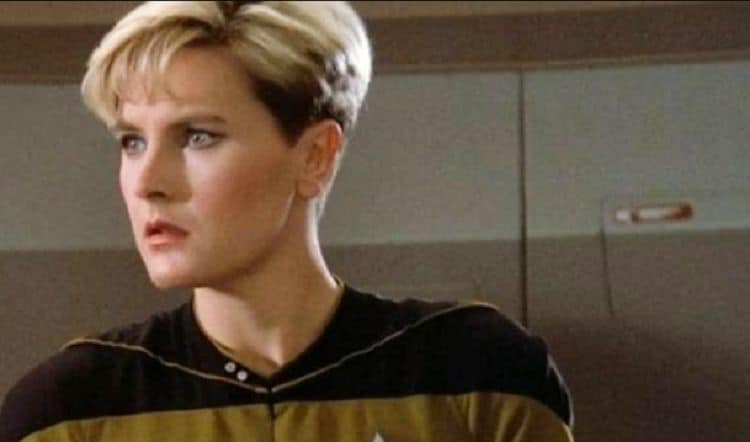 It’s amusing how an actor can be so prolific and yet remain known so well for one particular role since Denise Crosby has been connected to Star Trek: The Next Generation for years now. She’s gone on to do quite a few other things in both TV and movies and yet this is the one role that a lot of people still remember the most since she played the role of Lt. Tasha Yar for 27 episodes and then Sela for 4 episodes. She’s been revered for this character over and over but if you take a look at her filmography she’s done quite a bit with her career over the years since she’s taken on numerous roles and continued to strengthen her resume moving forward. While she hasn’t come back to Star Trek for quite some time she’s still been doing just fine with her career since it’s continued to treat her right and has yielded a very comfortable lifestyle. Trekkies are no doubt going to remember her for some time to come since her character was one that a lot of people enjoyed and were sorry to see go. But if there’s anything to take away from her career at this point it’s that she hasn’t allowed herself to be defined by one role, which is a pitfall that a lot of actors have experienced at one point or another in their career.

Denise has been easy to recognize by pretty much anyone that has seen her before since she’s hard to miss, but there are plenty of gigs she’s taken that have seen her complete a single episode on one show or another before moving on. Her time has been well-spent in focusing on her career and taking on a number of different parts that haven’t always been able to get her noticed, but they’ve kept her in the business and that’s the main point sometimes. It’d be amazing if someone just off the street still knew her by name without mentioning Star Trek, but there are plenty of movies and episodes from various shows that one could mention that might be able to get some recognition since she’s been in a wide array of TV shows and has starred in a few movies where she’s been entirely noticeable. She’s actually been in an episode of The Walking Dead, Dexter, and many others, and if you can recall, she did play a part in Deep Impact with Elijah Wood and Leelee Sobieski. It would be kind of a stretch to call her an A-lister at this time since she’s still skilled and very talented at what she does, but she’s been a lot more low-key than a lot of other actors and it’s fair to say that she’s not exactly at the top of a lot of lists.

But to say that she’s not worth consideration would be worse than inaccurate, it would be an insult since she’s done so much in her career at this time that not recognizing this would be akin to stating that she’s done nothing worthwhile at all. In truth, Denise is the type of actor that shines extremely bright for moments and then fades back, a person that is able to act, can continue to act, and is good enough to hang with those that do make it big, but then again, someone that isn’t bound to stay in the spotlight for very long, either because of personal reasons or something else. There are plenty of actors that go unnoticed after a big role and pop up now and then for people to see them and say ‘Hey, I haven’t seen that person in a long time’. The truth is that these actors are usually there most of the time and are easy to spot if a person knows where to look, but they don’t often get a lot of attention because they’re part of a project that hasn’t been marketed in the same manner as so many bigger productions. It has nothing to do with how famous they really are, though it does contribute to the fact that they’re not as celebrated. But what is easy to notice is that they’re getting paid to do something they enjoy and that’s one of the main pleasures in life, to be able to make a living off of something you happen to care about. It’s one of the biggest dreams of any person that’s ever made an honest dollar to be fair.

So while it’s true that Denise has been kind of in and out of the public view with her projects over the years, it’s equally true that she’s been doing her own thing and has been enjoying life as much as she can while continuing a career that has done well for her at this time.