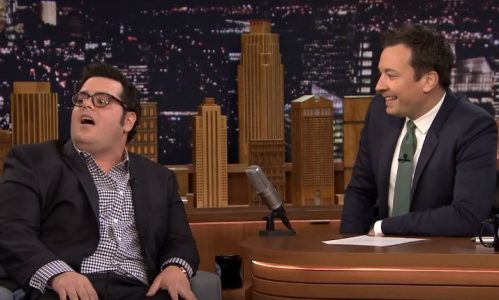 It’s always nice to see celebrities doing something nice for the average folks that love to watch their movies and enjoy them as entertainers, as it allows folks to think that despite the fact that these people make such large sums of money for their appearances, they’re still able to acknowledge that it’s important to reach out to their fans from time to time. Some might want to question what good Josh Gad and Amy Adams are doing while reading to kids via online videos but it’s likely best to take this on a case by case basis since some people will see this as a huge boon that celebrities are granting as they try to help others get through the current situation that the world is experiencing. Others might say that without the ability to promote or even create new movies at the moment that the celebrities are already wondering what the future is going to bring since movie theaters are down, production is down, and that means no money is coming in at this time. How one chooses to look at the effort that the celebs are putting in is entirely up to them of course, but as Bethany Guerrero of Screenrant appears to see it, they’re doing what they can to help out the kids during these trying and very difficult times.

In a way it does feel as though it might be a combination of both, but when reading to kids via online chat or video it also feels as though the celebrities are doing what they can to pitch in to help children continue to learn now that many schools have shut down and more and more children have to be at home with their parents or in some form of childcare where learning still needs to occur. By reading to kids the celebrities are keeping them stimulated and entertained, which can allow parents and caretakers to focus more on caring for the children as the idea is that homeschooling or even having to keep kids busy, safe, and cared for at the same time is quite the chore. Any parent that has tried homeschooling can tell you that it’s not as easy as it sounds and it’s not for everyone since it does take a good deal of self-discipline and quite a lot of patience to deal with. In this manner Gad and Adams are doing what they can to help a situation that has gone from being worrisome to outright frustrating by giving kids someone to listen to and stories to focus on in the even that their parents need a break or just need some extra time to work or complete other tasks. There is also the reward of inspiring children and helping them to learn as well, which is invaluable in its own right.

As far as spreading cheer and good feelings go, this is something that is appreciated by many parents since during the pandemic it has already been seen that many people are worried constantly about what will happen, if they’ll be secure enough to stay away from work for a prolonged time, what will happen if their children don’t get to go back to school eventually, and so on and so forth. The celebrities that have stepped up to offer their talents and their voices to the public in various ways have done a great service already by showing that even in these hard times there is something that can be done to alleviate the stress a bit and make it clear that the world hasn’t ended and that there is something else worth focusing on at the moment. Whether Gad and Adams’ efforts will be lauded by everyone remains to be seen, but many people have already made the decision that this is something to be fully appreciated and taken advantage of since it’s a step in the right direction when it comes to moving forward. Allowing depression, concern, worry, and stress to take hold during this time is something that everyone is struggling against and many are trying to cope with since the pandemic has a lot of people rightfully troubled and frustrated given all that’s happened thus far.

The more that celebrities help out, the more unified it feels our nation becomes, even with so many people still tearing at one another and trying to knock each other down. This kind of gesture is one reason why there’s still hope for humanity even when it seems that such an ideal has run out and become outdated. Hopefully others will take up this cause, or at least show it a good deal of support, as it could easily inspire an entire generation that might wish to repay that kindness one day. At this point, any kindness at all is a small miracle.