Home
Movies
What We Learned from The Sandlot Reunion Trailer 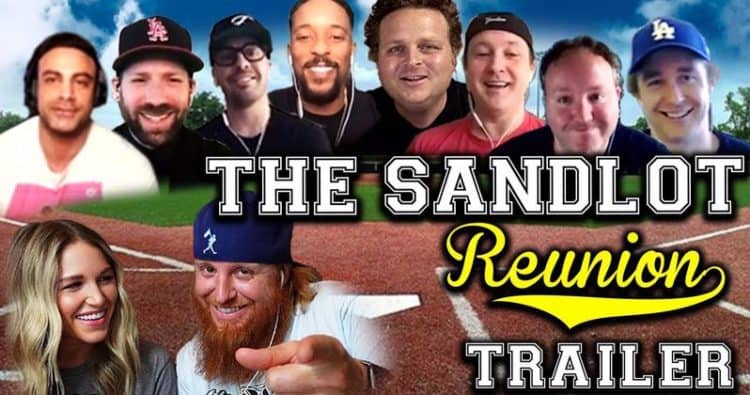 If you remember The Sandlot then you had at least one great memory in your childhood that you can draw from. The movie was by far one of the best and yet most simple productions that have ever been created and yet it sparked a memory so great that a lot of people would likely want to get in on a reunion like this just to say they’ve had the experience. In fact, there are likely major league ballplayers that would cite this movie as one of their favorites and one of the best baseball movies of all time. When you think about it that’s entirely fair since despite being about a group of kids that played a nonstop game on a sandlot the group had a love for the game that eclipsed pretty much any other aspect of it. How often can you take a ragtag group of kids and expect them to beat out a group of players that are supposedly at the top of their game and should be able to wipe the field with the kids that basically play for the love of it? The difference of course is that loving what you do and practicing it until every movement comes without effort and is executed so flawlessly usually beats out the mechanical process of training and simply going through the movements. That might not make sense to some folks, but the truth of it is that if you really love what you do then it’s no longer something you need to work at, it simply comes naturally.

It’s a little regrettable that the entire gang couldn’t make it to the reunion but it’s not hard to understand since a couple of them might be hard to find and the chance of getting them all on at the same time was probably kind of slim, but fact that so many were able to make it is pretty cool. Plus, the idea that they were discussing the whole Wendy incident was kind of hilarious since a lot of people tend to look at this movie at this time and figure that by allowing the moment to be humorous that we’re saying it’s okay for Squints to be kind of a pervy little predator since like it or not, this is how people might see it nowadays. Granted, his actions in the movie are a bit rash and definitely not entirely capable of being defended, but at the same time it’s not about promoting sexual predators or any type of sexual misconduct in the movie, it’s more about a young man finally snapping and wanting to steal a kiss from the girl of his dreams. Some folks might still think there’s a huge problem there since he didn’t ask for her consent, but if anyone remembers, he and the other guys did get banned from the pool after that, and Wendy was plenty upset. Plus, by the end of the movie, it was revealed that Squints and Wendy were married and had enough kids to start a team of their own. Getting down on movies like The Sandlot is kind of confusing really since it was meant to be a fun and memorable movie, not a secret love letter to sexual predators.

But moving on from that, it’s great to see that a lot of the stars from the movie have gone on to do other things or are at least staying healthy and doing their own thing in this day and age. Some of the stars went on to have pretty interesting careers while others kind of just fizzled out when it came to acting and went a different direction. What’s great though is that they’re bound to be remembered as they were in the movie since each of them put in a memorable role that was great in its own way and contributed to the whole since it was a team effort that made The Sandlot so great. Plus, seeing Art LaFleur was great since his role in the movie was small but it was extremely meaningful. It would have been nice to see James Earl Jones or Denis Leary or Karen Allen since they played important and influential roles as well, but the people that did show up were very appreciated, even the guy that played Phillips since he was part of one of the greatest scenes in the whole movie when he squared off with Porter, trading insults back and forth until the humdinger, “You play ball like a GIRL!” was unleashed. Oh no, I won’t apologize for it, even though plenty of women play ball harder and with more passion than some guys do. It was still an iconic line that resonates to this day no matter what people want to say. And there is one that tops it, just barely, that you can repeat to anyone that has an issue with the movie, “You’re killin’ me Smalls!”.