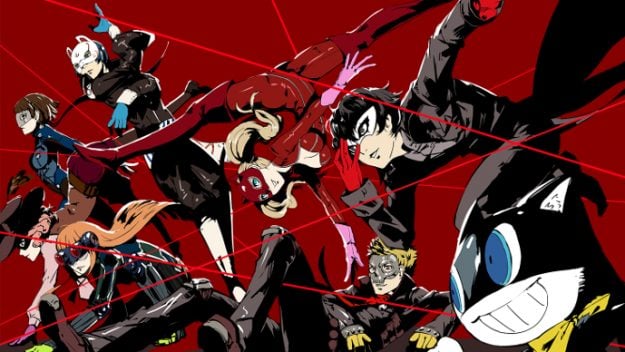 For those who are unfamiliar with the name, the Persona 5 series is a sub-series of the Megami Tensei series of video games, which are RPGs that make use of a wide range of historical, folkloric, legendary, and mythological figures. In the case of the more recent Persona games, their protagonists are high school students who have been granted the power to use Personas, which are facets of the mind that take on the form of the aforementioned figures but often with very unique twists. On top of the standard RPG gameplay, the Persona series features elements derived from social simulation games as well, thus enabling it to stand out among the rest of the Megami Tensei series.

Regarding Persona 5, it is centered on a high school student who was forced to transfer schools after he was put on probation because of a false accusation of assault made against him after he intervened to save a woman from being abused by a powerful politician. Unfortunately, that isn’t the end of his problems, which is why when he acquires the power to use Personas, he forms a vigilante group with like-minded students to change the minds of criminals and other malevolent individuals. On the whole, Persona 5 has been very well received, so much so that it has managed to become the single best-selling installment in not just the Persona series but also the Megami Tensei series as a whole.

Why Do People Think that Persona 5 Is Coming to the Nintendo Switch Anyways?

So far, Persona 5 has been released for both the PS3 and the PS4. However, there are a lot of people out there who have been wondering about a potential release for the Nintendo Switch, though at this point in time, this is no more than a matter of speculation. Still, said speculation isn’t wholly baseless, meaning that there might actually be something to it.

First, it has been revealed that the protagonist of Persona 5 will be one of the first DLC characters for Super Smash Bros. Ultimate. It is possible that this is nothing more than a piece of promotion meant to get Nintendo players interested in Persona 5 and Persona 5 players interested in the Nintendo Switch, which would theoretically be beneficial for both sides of the crossover. Certainly, the people behind Persona 5 have been known to allow other crossovers with other video game companies for said purpose, as shown by the Persona 5 collaboration with Cygames’s Granblue Fantasy in 2018. However, said benefit would have much greater effect if Persona 5 was made available on the Nintendo Switch, meaning that a port of the RPG would be a very natural move to make in the wake of this character choice. Furthermore, it should be mentioned that there is something of a trend of getting games featuring characters included in the Super Smash Bros. series onto Nintendo platforms. If Persona 5 doesn’t get ported over, its protagonist wouldn’t be left alone, but he would be very isolated. After all, even Cloud Strife no longer fits this criterion, seeing as how it was recently revealed that Final Fantasy VII would be released for the Nintendo Switch.

Besides this, there are other weaker pieces of evidence that some people have sought to use to support their speculation. For instance, the people behind the Persona series have registered trademarks for both “P5R” and “P5S” in recent times. We know that “P5R” refers to an improved version of Persona 5 that is being worked upon at the moment, which is something that has happened for both Persona 3 and Persona 4. Currently, “P5R” is confirmed to be for the PS4. However, that still leaves the “P5S,” which certainly sounds as though it could stand for Persona 5 Switch or something along those lines.

Ultimately, there is no real way to tell whether a Nintendo Switch version of Persona 5 is coming or not. Certainly, there are some pieces of information that can be interpreted to support that line of speculation, but it is by no means confirmed at this point in time. With that said, the Persona series’s inclusion in Super Smash Bros. Ultimate is certainly convincing, which is why no one will be too surprised if there will be a Nintendo Switch version of the game after all.