Home
Television
Reign
Why You Should Be Watching Reign 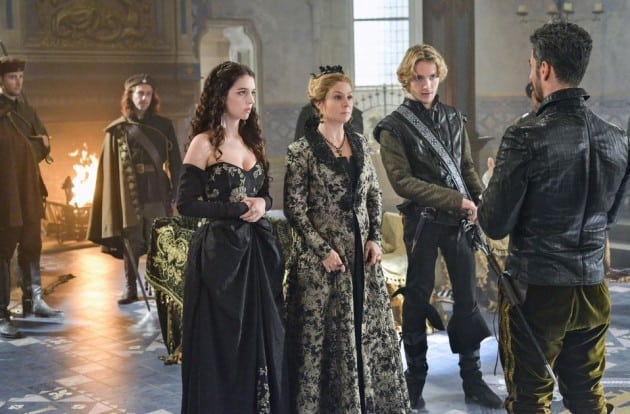 With all of the (deserved) accialm CW shows like Arrow, Jane the Virgin, and The Flash have been receiving, it’s easy to forget about less buzzed-about series on the network, such as The 100 or The Originals. However, in addition to both of them, there’s one other show on The CW that definitely doesn’t get the praise it should. I’m talking, of course, about Reign.

Now, I’ll admit, when I first saw the trailers for Reign, I was skeptical. A historical-based drama on The CW? There was no way that could work, I originally thought, but I was quickly proven wrong, as the series played very fast and loose with actual historical events (Reign does take many liberties but also ensures that some important moments–like the big death in the Season 1 finale–are mostly unaltered) and ultimately became one of the most fun shows on the network.

And, really, fun is one of the best compliments I can give Reign, even if it doesn’t completely capture everything that’s so great about the show. A series focusing on the early years of Mary, Queen of Scots (in a great performance by Adelaide Kane), in 16th century France shouldn’t be filled with this much suspense, humor, and heart–it should probably be slower, more deliberate with its pacing and allow for smaller, quieter character moments. Although Reign certainly isn’t without those type of scenes, it’s more inclined to burn through plots as quickly, if not more so, than its Thursday night companion, The Vampire Diaries, a series that has always been known to bounce from storyline to storyline like a pinball machine.

In the past couple weeks, I’ve binge-watched Reign up through the sixth episode of Season 2, “Three Queens,” and in that short space of time, I’ve gotten whiplash from all the plot developments and all the storylines the show juggles. Mary is marrying Francis, then she’s going to marry Bash, but then she actually ends up marrying Francis and Bash and Kenna, one of Mary’s ladies, who was also sleeping with the king, are forced to wed. King Henry goes from being an evil, ambitious ruler into someone who is truly psychotic, murdering essentially everyone women he sleeps with (in one memorable case, he did so through defenestration), until his own son secretly kills him in a joust. And then there’s all the show’s supernatural elements, from whatever “The Darkness” of Season 1 actually was to the ghosts that seem to be appearing in Season 2, and I haven’t touched upon the plague arriving and all the trouble that’s caused.

If my quick summary of the show sounds over-the-top, well, that’s because, Reign is essentially a nighttime soap opera set in the 1500s. It’s a CW show that straight-up uses current day pop music in some scenes and has instrumental renditions of them in others. (I’ll never forget when Mary and Francis danced to the castle’s musicians’ performance of Lorde’s “Royals” in Season 1.) 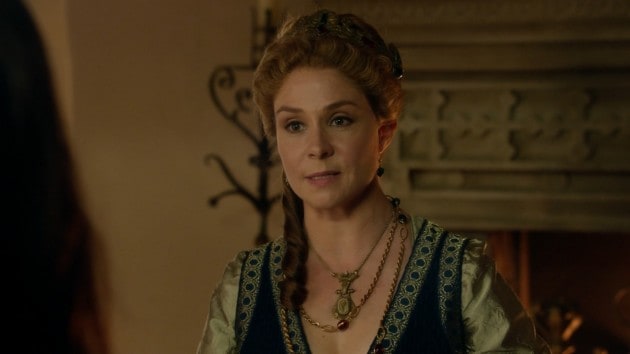 However, just because Reign doesn’t take itself too seriously, doesn’t mean it doesn’t have something serious to say. The show does a fantastic job of at providing us with strong, determined female characters. Mary, as Queen of Scotland and France, obviously is the most powerful of the women on the show, but her friends, Greer, Lola, and Kenna, also demonstrate control over their own lives as best they can during the times. For example, Greer not only marries an older man that she cares for, Lord Castleroy (instead of her younger lover, Leith) because of his kindness and generosity but also because he offers safety and security for her sisters and their future marriages. In a world where women were dependent on men for money, land, and pretty much everything else, Greer is able to use her choice of who to wed as an active, independent decision to provide for her family.

Furthermore, with regard to marriage, Reign also takes a very interesting look at the way politics can affect one’s relationship with his or her spouse, especially when they’re the King and Queen of France. Since taking up the positions at the beginning of Season 2, both Francis and Marry, and their relationship as a whole, have become incredibly more interesting, as we see the effects that the obligations of their political lives have on their personal lives.

Additionally, these marital and political conflicts also play into a larger theme that has been a part of Reign since last season: the theme of identity, specifically relating to the idea of whether or not one can be both a good ruler and a good spouse, or if these two roles are mutually exclusive. Francis and Mary have been and continue to struggle with what they should put first, their love or their respective countries, and the tension caused by this conflict (not to mention Mary’s inability to produce an heir) has led to some great dramatic scenes from both Kane and especially Toby Regbo as Francis, who has significantly improved as actor from the show’s earlier days.

And speaking of the acting on Reign, it would be impossible for me to write this article without mentioning the absolutely superb talent that is Megan Follows, who is pretty much perfection as Francis’s mother, and former Queen of France, Catherine. Whether she’s trading barbs with other nobles or giving harsh but sound advice to Mary, Follows is a sheer delight and my personal favorite part of Reign. Her performance is really the only reason you need to give this show a chance, and I could have written an entire article about why Catherine is one of the best characters on TV right now.

As a loosely-based historical drama, Reign doesn’t appear to fit The CW mold as well as most of the network’s other shows, which are primarily sci-fi, supernatural or superhero-related. But just like The CW’s other ratings-deprived series, Jane the Virgin, Reign is a real treat, an enjoyable blend of romance, suspense, and humor that everyone should check out. Trust me: as soon as you start watching, you’ll be hoping that Francis and Mary’s reign doesn’t end anytime soon.