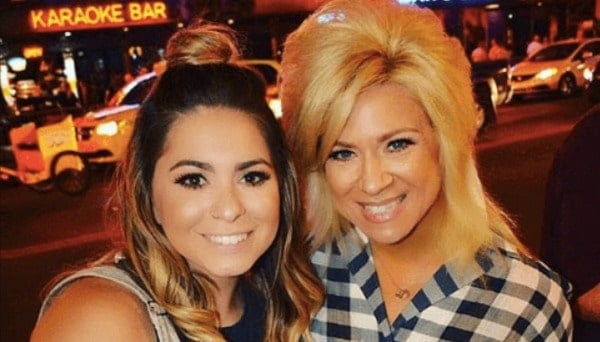 Victoria Caputo is an American Television star who has grown in front of the cameras all her life. She achieved everything in her life in the public eye, from a career in the beauty industry to starting a relationship with her boyfriend. Still, Victoria keeps some of the burning issues from the public amidst all the discrimination. She is the gorgeous daughter of a Long Island Medium star, who is well known and has felt her fair share of love and hatred from her fans. Victoria loves several things, from beauty to being the beast; she is a beauty professional as well as a very fierce boxer. Victoria claims boxing helps her to relieve stress and workout the body. We delved deeper into her life, and here’s everything you need to know about Victoria.

1. She is a reality TV star

She stars in the reality show “Long Island Medium” alongside her family. The series airs on TLC since it premiered on 25th September 2011. It revolves around her mother, who announced herself as a medium able to speak to the dead. Victoria and her brother have appeared on the show several times, but their mother admits that their appearances have significantly reduced in recent times. She blames this on her divorce, claiming it harmed her children.

According to Marathi, Victoria is the younger of two kids; her older brother is called Larry Junior. She was born on 27th September 1994 in Long Island, New York, where she also grew up. She lived in Connecticut briefly for three years in college before settling back on Long Island. She is the daughter of Teresa Caputo and Larry Caputo. Her parents divorced in 2017 after being married for 28 years. Her mother is a famous self-professed American medium who is well known for her reality television series “Long Island Medium,” which she launched in 2011.

Victoria is not yet married, although she has been engaged to her boyfriend, Michael Mastrandrea, since 2017. Her mother confirmed their relationship on Instagram when she shared photos of Victoria’s engagement ring and cake while congratulating her and wishing her happiness. Lately, Victoria has been busy with her personal life, and she has not been showing up much on the family show.

4. She is a victim of cyberbullying

According to Your Tango, Victoria was a victim of online bullying because of her weight. Her mother, Teresa, announced this unfortunate fact late last year and even addressed cyberbullying as a crime in an episode of “Long Island Medium.” She also went on her Instagram and Twitter accounts to condemn the act. She said that it broke her heart to hear people comment so horribly about her daughter’s weight. Victoria later took to social media to respond to her bullies, saying that the gain in weight does not change her as a person. Victoria, however, added that she was also not impressed with her weight. She blamed her critics for the negativity and advised them to mind their businesses.

5. She is a college drop out

After her High School, Victoria joined South Connecticut University. She studied there for three years, after which she decided to pursue her long-life dream of becoming a hairstylist and makeup artist. Victoria quit University and joined the Cactus Academy of Paul Mitchell. She later graduated from the academy in late 2015 with a qualification in cosmetology.

Victoria’s passion for gymnastics dates back to a very early age. She started taking gymnastics lessons at the age of four until college. During her college days, she competed in several competitions as a gymnast and won several accolades. She said in an interview that she liked her college because of the sport. She added that the coaches and the team caught her eye with their dedication and love for it.

Victoria’s zodiac sign is Libra. Venus is Libra’s ruling planet making those born under this sign to be fair, peaceful, and social. Victoria is a non-disputable lover of peace who dislikes being alone. She was born in the eleventh month of the twelve-month cycle. The eleventh month is the month of the dog according to the dates of the Chinese calendar. People born under this sign are known to be sincere, loyal, decisive, and independent. They are known to be brave and can tackle the hardships of life that come their way. They are, however, known to worry too much about the ups and downs of life sometimes, as can be seen from Victoria’s experiences.

8. She is a hairstylist

After she graduated from beauty school, Victoria joined MAC cosmetics in Long Island, where she began doing freelance makeup artistry. She now works full time in the makeup and beauty industry. Her love for her job has made her add beauty to her resume, and she has branded herself as the ‘Long Island Balayage.’ She currently owns her cosmetic line called ‘Hair by Victoria Caputo.’

Victoria commands a good number of followers on her social media platforms. According to Famous Star Birthdays, she has over 150,000 followers on Instagram and more than 100,000 followers on Twitter. For a long time, Victoria has been a part-time Instagram influencer. In 2018, she posted many promotions for a watch brand named Daniel Wellington. Caputo shared a photo of herself and her boyfriend in February, both of them wearing their watches. In the post, she offered a 15% discount for any of her fans who used promo code ‘VICCAPUTO’ for their next purchases.

Immediately after turning 18 in November 2012, Victoria took to Twitter to say that tattoos are addictive and that she wanted another one. She then added a symbol of three little bird silhouettes to her collection on her left foot. Victoria then added three dots and an eye on her right hand in January 2017. In October 2017, she visited the Empire State Studio and did a skull with eye sockets that are heart-shaped. The studio belongs to Tommy Helm, the star in Ink Master and Tattoo Nightmares. She did her most recent tattoo in January 2018, where she has inked an image of a small bee.