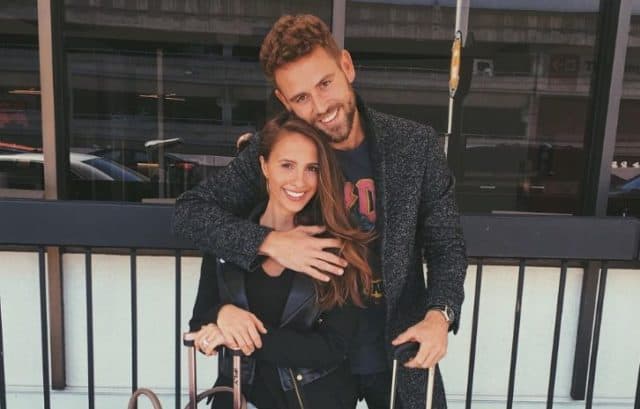 We still have over a month before The Bachelorette debuts but that doesn’t mean there’s not drama in Bachelor land.  Gee, I never could have seen this coming.  Apparently since Nick Viall’s been on the show Dancing with the Stars, Vanessa Grimaldi’s been a little salty about all the attention he’s getting.  Here’s the direct quote from US Weekly.

For Vanessa Grimaldi, battling 29 beautiful Bachelor contestants for Nick Viall’s heart was the easy part. Since season 21 of the ABC dating hit ended, the Montreal native, 29, is “having a hard time” while fiancÃ© Viall, 36, competes on Dancing With the Stars, a source close to the duo exclusively reveals in the latest issue of Us Weekly. Though special-needs teacher Grimaldi relocated from Canada to Los Angeles to be close to her love after he proposed with a 3.75-carat sparkler on the Bachelor’s season finale, “Nick rehearses a lot,” adds the friend. “They fight about it.” Another gripe: “Vanessa’s not used to the attention being mostly on Nick,” notes the source. “It’s taking a toll.”

Wait a second.  Someone from a Bachelor related show is seeking attention?  NO!  Really????  I guess things were easier for Vanessa when she had the show at her side to draw attention in any way she saw fit.   Vanessa is annoyed that Nick rehearses a lot?  I apologize for writing any of this.  I really do.  In fact, I’m cutting this thing short.  This is how I feel right now.