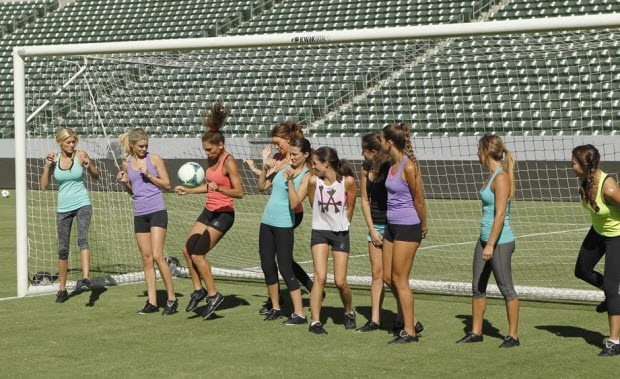 We’re still a few weeks away from truly getting a feel for a frontrunner on ‘The Bachelor‘, but last night’s episode got us closer to understanding what spins Juan Pablo’s wheels.

Episode 3 started with Cassandra (mother of her own child) getting the date card. How many times have we heard that ‘The Bachelor’ or ‘Bachelorette’ doesn’t want to keep the parent away from their kid if it’s not going to work? Well, it’s a good thing, but also puts the spotlight on Cassandra and a little bit of pressure. The best part of her date was clearly the car-boat. That was cool. The rest of the date was Cassandra giggling and trying her best to redeem herself after starting the date wearing a onesie. This was the quintessential date on this show, swimming, bikinis, eating, and dancing. Nothing special, but Cassandra does well enough to get a rose. A big decision because she has a kid and JP isn’t going to keep her around.

Up next was the group date on the pitch. Yep, the Los Angeles Galaxy let Juan Pablo and the girls play a little soccer. The game featured Kelly, Renee, Sharleen, Danielle, Alli, Lauren, Andi, Christy, Lucy, and Nikki. It was your typical sporting event on ‘The Bachelor’. Some girls are athletic and some are pathetic. It’s pretty funny to watch – especially those that treat the game like the Super Bowl. Ultimately, the outcome of the game doesn’t matter and we’re already at the group cocktail date/post-game refreshments. Nikki (one of our favorites) spends some nice time with Juan Pablo in which she candidly tells him she has trouble opening up in short conversations. This is followed by a makeout session with Andi then another makeout session with Sharleen who is suddenly hot for Juan Pablo. (We will discuss this later). Thankfully, Nikki gets the group date rose. We’re satisfied with that one.

The last one-on-one date features blonde bundle of energy Chelsea. Probably the most awkward part of the show was when Juan Pabs and Chelsea are jamming in the car on the way to their date. Back at the pad, Elyse slams Chelsea for being a kid saying Juan Pablo “doesn’t want another daughter”. If that’s the extend of the cat fighting we can live with that. Chelsea’s date is the perfect storm – eat tons of Venezuelan fried food then go Bungee jumping off a bridge. This was the ultimate test for Chelsea. I really felt in that moment if she didn’t jump she’d get cut and the date would be ruined. After several minutes, she did jump it was all gravy from there. In this date, Chelsea went from on the edge of elimination to being pretty secure. The closed the date out with a nice dinner and live performance at Pasadena City Hall.

The next morning Juan Pabs cooks up some breakfast for the girls, who surprisingly most of them come downstairs right out of bed. That was nice. Cue the bikinis and pool day (we were missing the reality TV component of this episode). The big take away from the day was Sharleen who has emerged as a snake in the grass. She pulls the emotional card to get sympathy then sneaks in a kiss. There’s more than meets the eye to this chick. Also notable, Clare who ran to the bathroom in tears because she had a great date, but hasn’t talked to JP since blah blah blah. In the previews, Clare emerges as a target of animosity for the other girls. To be continued..

In the elimination, Juan Pablo had to select the ladies that are going to join Nikki, Cassandra, and Chelsea in the next round. Andi goes number one – obviously. Renee two, thankfully – she seems to be the most normal. Followed by Kelly, Sharleen, Elise, Kat, Alli, Clare, Lauren, and Danielle. Leaving Lucy and Christy (who we didn’t even know was on the show) out. Poor Lucy – she handled it gracefully. On to the round of 12….