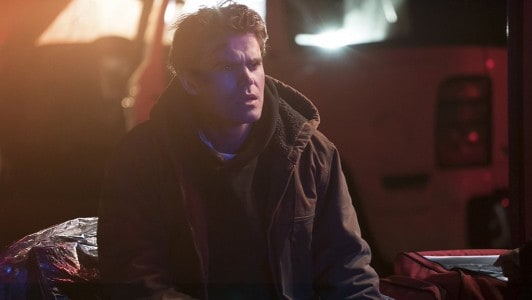 Many might think Elena was the core of The Vampire Diaries and while I won’t disagree that something’s been missing without her, I still would argue that the Salvatore brothers are the heart and soul of the show. This episode especially revisits the bond between brothers through a few key scenes.

Last week Nora and Mary Louise drove their car off the road, taking Rayna’s Phoenix stone sword with them. Stefan had already been stabbed by Rayna at that point so his soul was trapped in the stone again and the rest of us were left utterly confused as to what this meant for Stefan. We soon got all the answers we needed as Rayna was terrified about all the souls being freed from the stone. You see, she’d been hunting the worst of the worst vampires for a couple centuries now. Among them, a few serial killers. One of which happens to be in Stefan’s body now and headed back to the scene of his crimes at a college in Memphis.

Much of this episode is about reuniting Stefan’s soul with his body. For some reason, human bodies are incapable of holding vampire souls for long. Who would’ve guessed? Well at least Alaric knew from his experience with Jo (or technically not Jo) earlier in the season so now Damon knew the clock was ticking.

Stefan woke up to the worst possible conditions in his new human body. This man, Marty, was a fugitive and an addict on top of it. Even though Stefan’s first instinct was to save a bus of people in an accident before him, that doesn’t undo the fact that Marty caused the accident just before dying himself and Stefan inhabiting his body. Weird, weird stuff here. But anyway, Stefan-as-Marty’s face is all over the news and to top it all off, he’s an addict in withdrawal. He almost freezes to death on the side of a snowy Arkansas road until Damon reaches him on a cell phone.

The brothers haven’t had much of a chance to talk about their feelings before and boy, do they let it all out now. Stefan has a lot to say to Damon, which he’s perfectly entitled to. I was more angry than Stefan was when Damon left him those 3 years ago to dessicate away and wait for Elena to wake up in 60 years. Stefan needed help desperately from anyone, and at the very least he should’ve been able to count on his brother but he couldn’t. Damon owns up to his faults of being selfish but I can’t even defend him again yet. He tries to make the point that Elena changed him, and maybe that is true but he has a long ways to go to actually prove it.

Damon found Stefan/Marty passed out on a road after encouraging him to walk as far and as fast as he possibly could. The really heartbreaking line was Stefan saying he didn’t believe Damon would be there when he couldn’t go on any longer. The disappointment in his voice hurts more knowing how true it is. I’m not sure the brothers will ever be the same again. Damon has a lot to prove but Stefan has no obligation or reason to trust he’ll be any different. At some point people are who they are and we have to either accept their flaws or respectfully keep a distance.

There wasn’t much more to note about the episode other than Ric being roped back into the supernatural mess now too. He was able to warn Damon of the ticking time bomb when it comes to a vampire in a human body, but mostly he had some interesting scenes with Valerie. They both have experience with watching Stefan and Caroline’s relationship from the outside, maybe even being their significant other’s second choice. From the sounds of Ric recounting his and Caroline’s engagement, it doesn’t seem like the most romantic endgame relationship for Car at least. She only said yes to the proposal because it made sense for the kids. I’m sure she loves Ric on some level but if he even thinks that’s why she agreed to marry him, that’s a problem.

Next week everyone will be racing to save Stefan’s body from being framed by the serial killer trapped in there from the 1800s. At least Paul Wesley’s enjoying himself playing another wild and dangerous incarnation of Stefan!

Check out the preview of that episode here and let us know what you thought of “I Went to the Woods”!

The Vampire Diaries Season 7 Episode 17 Review: “I Went to the Woods”

Damon races to save his brother when Stefan’s soul awakens into a human’s troubled life.