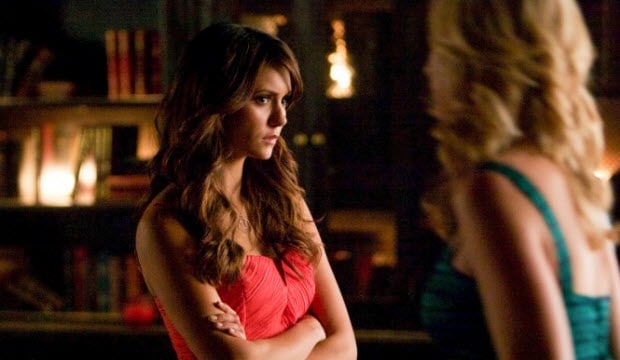 Aside from Caroline’s hatred for Damon, I really enjoyed this episode of The Vampire Diaries.  We saw Bonnie adjusting to her new position in the supernatural world. All the girls finally start to settle into traditional college life.  Even Katherine ends up with a new lease on life.  All seemed well, until that cliffhanger at the very end.

Caroline and Elena plan a party to welcome Bonnie back.  At least this show still has its sense of humor, as even Bonnie points out in a video message to her mom, “what dorm has a fireplace?”  That whole party planning scene between the three girls was pretty funny, as they talk about making flyers for the party since they’ve each only made one new friend at college.  Conveniently, those two new guy friends, Jesse and Aaron, are revealed to be roommates.  Caroline only discovers this when she gets a call from a frantic Jesse asking her to come help him before he attacks his roommate.  She finds that he’s a vampire now, and vows to teach him the ropes of vampirism with the help of Elena.

Elsewhere, Damon holds Dr. Wes captive, trying to get answers about his experiments with creating a new vampire in Jesse.  It turns out Wes was injecting him with Augustine vampire blood to make a different kind of vampire, one that feeds on other vampires. Meanwhile, Jesse discovers his new craving when dancing with Caroline at the party.  He goes back to Wes’ lab to find out why he did this to him.  Because his appetite is insatiable after he got a taste of Caroline’s blood, he turns on Damon.  Whatever kind of Augustine blood is in him makes him even stronger than Damon.  Elena gets there just in time to save Damon by staking Jesse.  RIP Jesse, we barely knew you.  Caroline was upset that Elena had to kill him, but seriously Caroline?  She was doing you a favor.  Dr. Wes’ vampire experiments are being conditioned to drink only vampire blood, thereby eliminating the “monsters” one by one.  At least we know they aren’t indestructible.

When Elena and Caroline leave to go back to the party and leave Damon to clean up the mess with Wes, Damon makes a shocking discovery.  He finds a blood bag in the back of a freezer with a number labeled on it, which triggers his memories of a time in the past when he was an Augustine vampire.  I thought there was literally only one vampire named Augustine, but apparently that’s a term for some kind of lab rat vampire that a secret society runs tests on.  Sounds sort of like the Initiative from Buffy’s college years, right?  Except these Augustine vampires aren’t simply getting sterilizing chips implanted in their heads.  These vampires get turned into a new breed of vampire, so it’ll be interesting to see what exactly happened to Damon during his time as an Augustine vampire.  Wes broke out of his binds and activates vervain to knock Damon unconscious.  He wakes up back in an Augustine cell.

When Bonnie was swapped out with Amara to be the new anchor between realms, it was revealed that she will feel every supernatural being’s death.  This looks like a cool new power that could lead to all sorts of possibilities, as it appears she can also get weird visions of ghosts just chilling on the other side.  She spaced out at the dorm party and saw an elder witch that had passed through her earlier.  She was able to talk to her, and the witch seemed at peace on the other side.  I’m curious to see what else this ghost whisperer-like power will bring to future storylines.

Back in Mystic Falls, Katherine ends up being useful.  She’s drowning her sorrows at the bar when she hears Matt’s video of his possessed Czech traveler.  She figures out that, of course, Nadia is responsible for Matt’s possession.  With the aid of Stefan and Nadia, she finds out the traveler was sent to track and kill Silas and herself.  Naturally, Katherine then stabs Matt, which only expels the traveler’s spirit inside of him.  One problem down, another to go.  Katherine also caught on to Stefan’s debilitating PTSD and she slowly starts to calm him down by asking him to concentrate and name all the people he’s killed as a vampire.  This seemed odd, but it did help bring Stefan back to the present from his visions of his constant drowning all summer.

Stefan repays the favor when he reads a suicide note that Katherine left for her daughter.  I really hope something can be done to save Katherine, because her attitude is unlike any other character on the show.  Her note reads that she can’t escape the greatest monster of all, time.  She jumps, only to be caught in the arms of Stefan.  He learns of her rapidly deteriorating condition, and in one of the best quotes of the season so far, simply says “You’re Katherine Pierce. Suck it up.”

Because next week is Thanksgiving already, we have to wait two weeks to find out what happens to Damon now that he’s locked up in the Augustine cells.  In the meantime, be thankful that Matt Donovan has made it this far into the series as a human!