Home
Movies
Horror
V/H/S: Why This Anthology Film Is Short Of Being Great 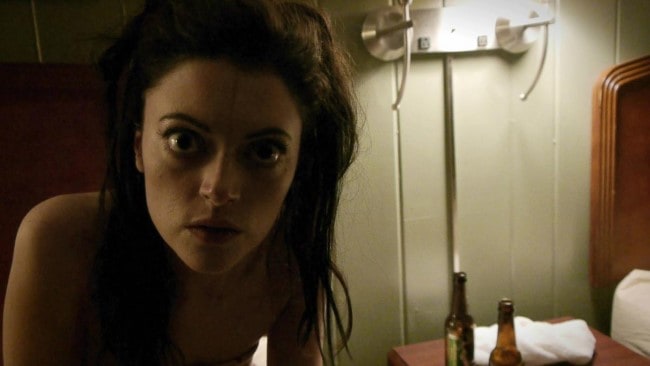 In 1999, The Blair Witch Project started the entire found-footage gimmick; however, by the time 2012 rolled around, the special genre had become stale and pedestrian. Enter V/H/S, an anthology series that featured several horrific shorts from different directors who know a thing or two about making a horror film. With the recent release of V/H/S 94, it’s safe to say that the horror franchise has found success thanks to its unique spin on the found-footage genre, though that doesn’t necessarily mean that equates to a great film. Going back to the film that kicked off this franchise, you can see the potential of this gimmick; however, V/H/S never fully succeeds as a whole movie. It’s solid, but it comes short of being great.

First up, Amateur Night, directed by David Bruckner, it’s a tale about three guys who were just looking to have fun and hook up with some hot chicks; however, one of those chicks ends up being a vampire who slaughters the entire crew. The thing about these shorts is that we don’t necessarily have time to “get to know these characters” as short films simply need to get to the point pretty fast. Thus, what would do get from these men is that they come across as classic college douchebag jocks. One is drunk out of his mind, the other is trying to have sex with a girl who’s clearly passed out, and the guy recording isn’t really trying to stop him. It’s kind of hard to root for characters like this, so when the vampire girl attacks, we don’t feel sympathy for any of these men. Is it freaky? Definitely. Is it terrifying? A little bit, though I would never call the entire sequence scary. It’s a horror short that has the gore but fails to be truly anything memorable.

Sound Honeymoon doesn’t fare any better. Ti West does a better build-up to the climax; however, the problem is that the payoff just wasn’t worth the wait. Another big issue is that the found-footage gimmick actually works against the short film here. The big twist is that the mysterious woman throughout the couple’s second honeymoon was actually the secret lover of the wife. The wife ends up brutally murdering the husband in his sleep, which is actually quite terrifying because this could happen in real life. It takes advantage of someone’s vulnerability, though there’s a lot of questions that harm this twist. If the wife wasn’t in love with her husband, why get married to him? What was the purpose of killing him when she could’ve just left? The husband doesn’t come across as a bad guy thus it’s head-scratching that she would go to such extremes just to be with her secret lover. Speaking of which, why would she record killing her husband? That could’ve been dismissed as the women are twisted and wanted to rewatch the murderous moment; however, the lover asks, “did you erase it?” thus negating that theory. Second Honeymoon is terrifying, but not particularly scary, and the more you think about the illogical holes in the short story then it ultimately ruins the film.

Tuesday the 17th is arguably the worst of the bunch, as the characters are completely unlikeable in this short. I get that their comeuppance is death, but the issue is that these four are such douchebags that I don’t want to spend time with them before their eventual doom. Plus, the story doesn’t make too much sense. The girl tricks her friends to catch the serial killer in the act, yet she doesn’t have any sort of plan other than recording him? I’ll admit the visual effects are pretty cool and so is the villain, but the whole segment falls flat because of the a**holes carrying the film.

However, the two best segments are saved for last, Joe Swanberg’s The Sick Thing That Happened to Emily When She Was Younger and 10/31/98. Neither of the shorts relies on gore to carry the film and the characters actually come across as decent human beings. The twist of both films works because of the build beforehand and the scares are genuinely effective. In fact, each short is done so well that I wouldn’t mind seeing a feature come out of them. Does the found footage gimmick help? Not necessarily, but Swanberg makes it work by using Skype, and the found-footage aspect for 10/31/98 doesn’t distract from the overall segment despite the useless need for the gimmick. The whole V/H/S experience isn’t bad and the first three segments have so genuinely frightening moments, but the film never reaches greatness because it feels more like shock and gore took center stage.