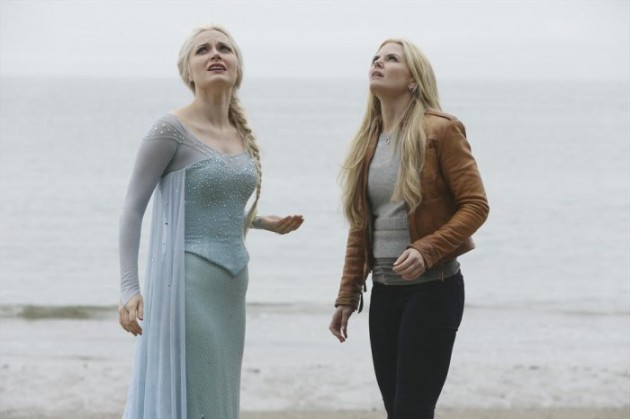 After going out on a big cliffhanger in its last episode, Once Upon a Time finally returned last night as the citizens of Storybrooke faced their third curse.

I know it might be unfair to say this, since it’s Frozen related, but I have never been this interested in flashbacks like I have been for all the Arendelle flashbacks. Every week, I keep getting more excited about seeing the live-action Arendelle and all the adaptations of those characters, even if they do include appearances by Prince Hans. Even though I love to hate this character, I have to give lots of props to Tyler Jacob Moore for making the character so easy to hate.

One of the things that has slipped my mind this season is that there has been time travel involved and had Emma not mentioned it in this episode, I wouldn’t have thought about it all. We see Kristoff and Anna trying to get a wishing star by paying Blackbeard a visit and just like the first time we saw him: this take on Blackbeard is incredibly underwhelming. Good thing we have Hugh Jackman playing that character in Pan next year who will without doubt, rock that role. What these flashbacks also gave us this week was more adorable scenes between Anna and Kristoff despite the circumstances.

The scene when Anna and Kristoff are about to be thrown into the water was when it all got incredibly interesting. Hans points out that Arendelle had been frozen for 30 years and Anna then realizes that there must be a reason why the Snow Queen released them. I was just surprised that it had gone 30 years, but at the same time it makes sense. But this makes me somewhat confused over the timeline and it reminded me that we still don’t know exactly how Elsa’s urn ended up in Storybrooke. Unless I missed something, it seems that they decided to just leave that aspect with the simple explanation that it was just the weird ways of time travel.

Meanwhile, in present time we see our heroes preparing for the storm as they struggle to find a way on how to stop the curse. Because of my enormous irritation with Rumple, it was very difficult to enjoy any scenes in this episode. I keep waiting for him to just pull a 180 on the Snow Queen and reveal that he is actually still a good guy, somehow. But all we get is him just having way too fun using Hook as his slave and even I felt sorry for the one-handed captain. Why spend time redeeming Rumple last season to only take it away in this season? I get his motives and it’s fine for what they are, but why does it have to be through evil ways?

I have mentioned several times this season that this year, the writers and Jennifer Morrison are starting to win me back when it comes to Emma. I’m really enjoying the way they are portraying her this year and this is going to sound wrong in so many ways, but the scene where Emma reveals her fear of failing her parents and the people in the city, really got to me. This is the type of hero that I want to see: someone that does reveal genuine fear before they have to go into battle and Morrison is just perfect with it.

Even though we all knew the two sisters would reunite at some point, if you didn’t throw your arms in the air of happiness when Elsa and Anna finally saw each other again, there must be something wrong with you. Although the timing couldn’t have been more wrong because of the curse, both Anna and Kristoff will now also be affected by it and did you notice that Anna wasn’t cuffed to a table like Kristoff was? That is definitely concerning to say the least. The moment when the curse was unleashed and affected the characters was incredibly daunting and gut wrenching.

I don’t know why I felt this, but that brief second when Charming and Snow stopped holding hands and looked at each other with menacing eyes, was just chilling. Just seeing those two being ready to turn on each other, speaks a lot for what this curse is going to do with the town and the show as a whole. I enjoyed that those last seconds was score-free with them cutting to black with a haunting boom. Overall, “Fall” was a terrific episode that set up these two remaining episodes of Season 4A perfectly and something tells me that it’s not going to be an easy fight.