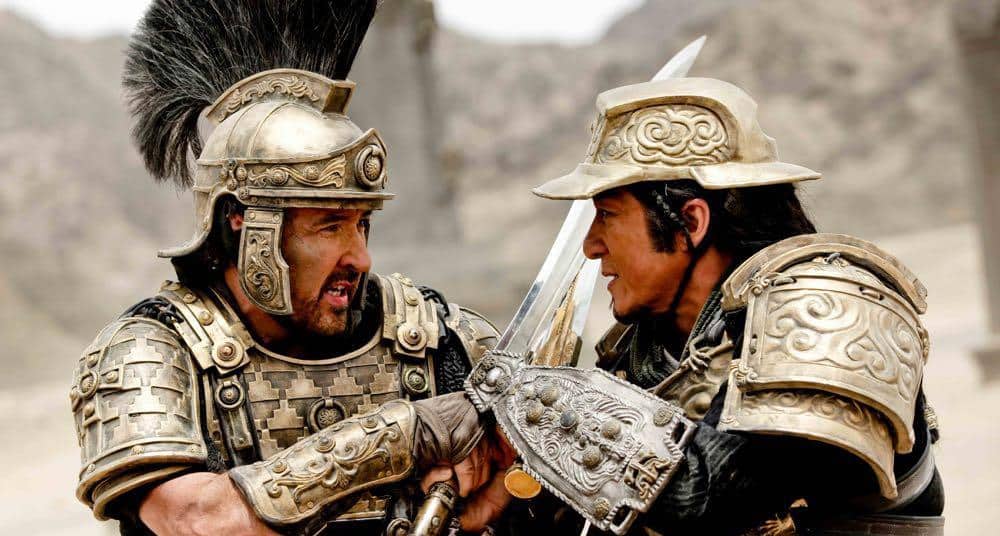 It’s easy to want to argue with movie critics, but it’s not always easy to prove them wrong since how a person feels about a movie is a very personal matter. Movies such as Dragon Blade tend to attract notice since the words ‘dragon’ and ‘blade’ usually mean action of some sort, and put together they sound almost mystical. The look of the movie cover even makes this feature look appealing since Jackie Chan is such a huge action star that a lot of people can’t help but feel as though they should be watching when he’s at his best. The sad part is that as cool as this movie looks, it does feel kind of thrown together in a manner that doesn’t make for a very cohesive story. There aren’t any serious time jumps or cuts from one scene to another that might give this feeling, it’s simply a quality of the movie that the critics tended to notice and isn’t exactly hidden all that well. Plus, how often do you get to see John Cusack play the role of a Roman general and match blades with Jackie Chan?

The obvious answer is never since up until this movie it’s fair to say that the two men were never seen together on screen unless someone can pull up a clip from who knows when that proves me wrong. Hey, I’d be impressed if that happened. But getting back to the movie, it was a bit of a shock to see Cusack playing such a role since this isn’t the norm for him, and more to the point, it’s something that he actually did well enough in this case. The fight choreography in this movie was actually quite nice since it was quick, a bit flashy, and definitely looked deadly enough in some respects with the quick, constant movements that were fairly easy to track and didn’t suffer from horrible camera angles or movement.

Stories of the Silk Road are usually kind of interesting but they do have a tendency to be taken out of context quite a bit and given over to a lot of exaggeration on the part of the movie since while it was a huge historical set of trade routes, and is still in use today, it’s also a great place for many stories to be thought up and take place given that the Silk Road covers a huge expanse between China and the Far East with the rest of Europe in a big way. At one point the Silk Road was the main avenue for trade, but it was more than a little dangerous since back in ancient times bandits were still very much a danger to many travelers that didn’t take the proper precautions if they could. The movie kind of operates under that same idea in a big way but goes off into the story of Huo An, played by Jackie Chan, and incorporates the Romans in a way that sees them as invaders, but also as refugees in a way since they’re fleeing the influence of another individual, Tiberius, who is intent on retrieving and killing his younger brother Publius.

After a fierce fight in which Huo An and Lucius, Cusack’s character, come to a stalemate, Huo An allows the Romans to enter the city he and his men had been exiled to earlier in the movie. While inside the diverse mix of individuals find that they have a lot to learn from one another in matters of engineering and in combat, and come to understand each other better over a period of time. When Tiberius, played by Adrien Brody, comes a-calling however, Lucius is captured and executed, while Publius and his manservant are forced to their deaths to avoid the torture that might await them. Huo An, who was away seeking reinforcements, is the only one left to oppose Tiberius, as the Roman threatens the Silk Road in its entirety, which is something that Huo and his men can’t allow. Unfortunately, even with the many reinforcements that Huo is able to bring to bear, Tiberius’s army is still too great, and in the end, it comes down to a battle-weary Huo An taking on Tiberius in a battle that sees Huo driven to the ground and almost executed before he makes one final move.

Blocking the killing blow and breaking Tiberius’s arm, Huo opens the other man’s throat with the jagged edge from his buckler, and Tiberius finishes himself off. All in all, this is kind of a touching and heartfelt action story, but this time the critics were right in a way since it did feel as though it didn’t have the needed flow throughout the movie. In terms of action, it was great since the choreography and camera work were nice, but it just didn’t have a couple of crucial elements that would have pulled it all together.