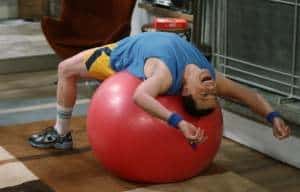 On last week’s episode of Two and a Half Men, Walden asked Zoey (Sophie Winkleman) if she and her daughter Ava (Talyan Wright) would move in with him. Zoey agreed on the condition that Alan moves out. This week, they do a trial run over spring break, and Walden breaks the news to Alan while he’s doing unusual movements on an exercise ball.

Shortly after Walden bursts Alan’s bubble, Alan bursts his exercise ball and lands hard on the floor, declaring that there’s no reason to panic: he just needs a temporary new home and three new balls.

Berta hears the news that Zoey and her daughter are moving in, and when she hears that the daughter is 7 years old, she tells Walden she’ll be back in a week. Walden promises that it won’t be more work for her and he’ll take care of it, but Berta recalls a time when another child showed up for a temporary stay and never left. “Fool me once, shame on you. Fool me twice, I want a fully funded 401k and a Camaro.”

Berta doesn’t understand–Ava is adorable! She really is. Zoey and Ava arrive and Alan departs after an unpleasant exchange with Zoey. Alan lets them know he’ll be staying with Lyndsey (Courtney Thorne-Smith), to which Zoey remarks, “How wonderful for her.” Just before Alan is out the door, he finds out that Ava will be staying in his room; he has to stay a few more minutes to remove some key items: mostly magazines. 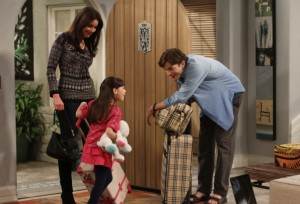 The trial week begins. Zoey needs to run to the store; Walden offers to go for her, but she says she needs things that she doesn’t want him to know she needs. Instead, Walden offers to watch Ava while Zoey goes. This is the best offer Zoey could hope for, and she leaves the house and breathes in the “sweet, sweet smell of freedom.” Immediately, Ava is bored. This means it’s time for a montage of Walden and Ava set to the tune of “Girls Just Want To Have Fun.” It’s a long montage, and it made me wonder how long Zoey was actually gone. There was a dance party, a tea party, Ava riding on Walden’s back, a puppet show, hide and seek, baking and even finger painting, where Walden painted “kill me now.” Eventually, Zoey returns, but Walden still puts Ava to bed, reads her a story and checks for monsters (he did find one in the form of a plastic woman in Alan’s closet). In the morning, he wakes to Ava’s face and Zoey is fine with letting him get up early to make her breakfast; he fails with runny eggs, dry oatmeal, and “bloody dreadful” waffles. Walden gets it: it’s difficult taking care of a child, especially one that desires Pellegrino and Eggs Benedict. 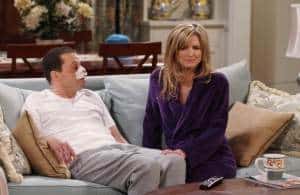 At Lyndsey’s house, Alan is excited that both of their kids are with their other parents, but Lyndsey’s idea of romantic doesn’t quite match his. Lyndsey has a list of things she wants Alan to do around the house, starting with fixing the guest toilet. Next he needs to replace a fuse and electrocutes himself while trying to use a penny instead of a new fuse–his hand is essentially paralyzed. It doesn’t matter to Alan. He is still excited to be alone with Lyndsey, but once they are in bed, she hears something and is afraid there is an intruder in the house. Alan goes to look, despite his useless hand, and gets smashed in the face when Jake and Eldridge open the kitchen door. The kids never notice him during their visit to get weed out of the crisper. Now Alan has a broken and bandaged nose–and looks like he’s from Whoville–but he still wants to fool around as per the episode title: “Mr. Nose says no, but Mr. Hose says yes.” Lyndsey is willing, and then manages to unzip his pants in a way that further injures him. But Alan can’t give up! Later, he’s in sweatpants: a safer form of clothing. He is ready to go again, but Lyndsey smells something dead under the house. Alan can’t wait for her to call an exterminator, so he investigates the situation himself. Nothing good can come of this, and he gets attacked by a possum. 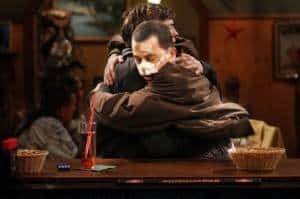 Tired Walden and battered Alan meet up for a debrief at the bar. The weird smell is Neosporin with a hint of possum. After spending a bit of time pretending that their living arrangements are working out, Walden starts to ask, “If I could get rid of them…” and Alan interrupts, “Yes. A hundred times yes.” They hug it out.

What does this mean for Walden and Zoey’s relationship? Zoey claimed that they would either move in together or be done if it didn’t work out. I’ve always enjoyed the couple, but after all, this show is not called “One and a Half Women and a Man.” Maybe it’s time for both Walden and Alan to become bachelors again.