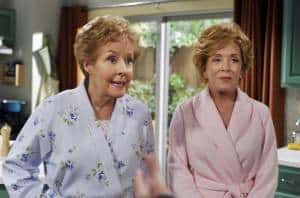 We learned a couple of things in this week’s episode of Two and a Half Men: Jake still has the ability to form several complete sentences, and Evelyn is still alive. The past few episodes have focused on the two couples: Walden and Zoey, and Alan and Lyndsey. Those episodes were enjoyable, but this season has had a lack of Jake scenes and a lack of Evelyn altogether. The March 19 episode, “Palmdale, Ech,” begins to make up for this.

The episode begins with Walden talking on the phone to Zoey, who will be gone for another week. They say, “I love you” back and forth many times, and Jake and Eldridge start to make fun of Walden. Walden reassures Zoey that neither Alan or Jake will be living in the house forever. (Just until the series ends, or longer.) 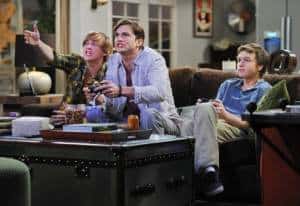 After the call, Jake and Eldridge join Walden on the couch so they can play their video game on the big-screen TV. They discuss how Jake’s dad is meeting Eldridge’s grandmother, and Walden tells them how impressed he is that they aren’t angry about their parents’ divorces. The kids explain that it’s hard to stay angry when you smoke as much pot as they do. When Walden was angry after his dad left, he poured his anger into coding and made his first million by the time he was 20 years old; this is Jake and Eldridge’s plan too.

Lyndsey is completely high when she and Alan go to pick up her mom. She explains that her mom is like a hamster: she seems cuddly, but eats her young. She’s charming to everyone except her family; she hated her husband and tried to kill him once. Lyndsey warns Alan to not discuss politics, religion, or The Price is Right (she misses Bob Barker and does not like Drew Carey).

Back at the beach house, Jake asks Walden if he plans on marrying Zoey; the boys think she’s hot. Walden is unsure; he loves Zoey, but there are other things to consider, like the fact that he’d be a step-dad. Jake tells Walden that he likes his step-dad, although it has to do with money and various other superficial factors. Somehow, this ends up in a conversation about how everyone’s parents have sex, Jake proclaiming that he’s not a virgin, and Eldridge explaining that he’s not sure if he is or not.

Alan and Lyndsey pick up her mom, Jean (played by Georgia Engel), and she immediately tells Alan that Lyndsey never set the bar very high in terms of men–she always preferred quantity over quality. She asks Alan if he has kids, and thinks it’s good that he has a son, because it wouldn’t be a good idea to have another Eldridge with Lyndsey. Lyndsey changes the subject to their weekend plans, and her mom says anything will be fine, but Lyndsey’s idea is to have lunch at the Santa Monica Pier and then go for a walk on the beach. Jean responds, “No, that’s fine. I’m not afraid of homeless people.” Alan tries to put a positive spin on the conversation and compliments Jean on how well she raised Lyndsey; she thanks him, but says it was touch and go for a while. After a while, Jean falls asleep in the back of the car, and they discuss Lyndsey’s ninja mom: she’s sneaky and backstabbing. It makes Alan grateful for his own mom, who will just walk right up to you and hit you in the face with a lead pipe. They decide it would be a good idea to get their moms together, because maybe they would hit it off and it would give them a break. The plans for Mom-ageddon begin! 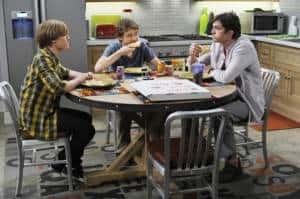 Walden confirms with Jake and Eldridge that they will be graduating this year. They’ve decided they want to be consultants for Walden. The first consultation will be to decide what to consult him about. Jake says, “How about this: we could tell you what kids these days are into, and then develop killer apps that target that geographic.” Walden corrects him, “Demographic.” Eldridge continues, “No, Republican kids too.” Their first app idea is one that customizes pictures of a guy’s junk. Yep. It will have silly hats, glasses, and little messages like, “Wish you were here.” It’s Photoshop for junk, “We call it Junkshop.” This exchange, although vulgar in the way Two and a Half Men typically is, is why there should be more Jake.

Jake and Eldridge ask Walden if they can take his $100,000 car to a party in the valley. Obviously not, but he decides to drive them. In the meantime, the kids thought of another app: a timer to see how long someone can hold their breath under water (Eldridge has his head in the sink, testing the concept). Walden, as childish as he sometimes is, kindly points out that it would be the same as any stop watch app.

Alan picks up his mom for dinner, and Evelyn points out that the last time Alan invited her for dinner, Jake was still cute. It emphasizes what the viewers are thinking: where has Evelyn been since very early in the season? In any case, she’s back, and she’s mad when she finds out that she has to have dinner with Lyndsey’s mom. She doesn’t like old people, and she also doesn’t like where Jean lives: “Palmdale, ech.” They have something in common, though: they both tried to kill their husbands, so Evelyn can run with that.

Walden drives Jake and Eldridge to Amy Lane for the party. “Isn’t Amy Lane the name of the chick having the party?” The kids have no clue what the address is, and no clue how to get it. They end up at a house with a balloon out front, but it ends up belonging to a very creepy guy who is apparently trying to lure people in–Jake is smart enough to realize this, but has to convince Eldridge. Eldridge is awesome at making Jake look not completely stupid.

The mom dinner starts out rocky, when Evelyn talks about all of her exotic travels and uncircumcised men, while Jean compares her travels to Six Flags and Epcot. But the moms grow on each other. Jean ends up asking Lyndsey to take her to get a tramp stamp, because Evelyn has one. After dinner, the moms go out together… somewhere that has men and dancing, but somewhere that they won’t personally be dancing.

Unsure of where the party is, Walden, Jake and Eldridge stop at a restaurant to get food. Walden mocks them about not getting the address, “If only there was an app that could capture the spoken word.” He then plays back his voice from his phone. A couple of girls that the boys know walk in the restaurant; they were likely at the party and know where it is, but the boys are unlucky because they don’t have the girls’ numbers, and therefore, can’t text them. It’s unclear whether this stupidity is caused by pure laziness or a complete lack of understanding of verbal speech. Walden asks them what they would have done at the party. Their response: hook up with chicks. Walden gives them a little push and asks why they don’t hook up with the chicks who just walked in. A light bulb appears above the kids’ heads; they walk over to the girls and Jake delivers a smooth line, “Hello ladies, mind if we hook up with you?” Maybe Jake is missing his Uncle Charlie in this instance, but Walden will be a kinder mentor. 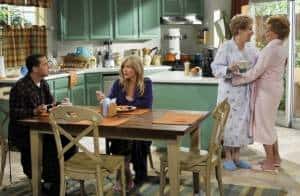 It’s the next morning, and Alan and Lyndsey are having breakfast at Lyndsey’s house. Her mom walks in the kitchen… followed by Evelyn. It appears they hit it off, and got to know each other “pretty well.” They kiss! Oh, Evelyn… even more unpredictable than her deceased son.

Speaking of Charlie Harper, news broke today that the character will be back–as a ghost and portrayed by Kathy Bates. In other news, Ashton Kutcher is heading into space.

What did you think of “Palmdale, Ech”? Watch Two and a Half Men, Mondays at 9/8c on CBS.