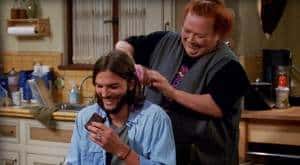 Adult films, magic brownies and a giant cat holding a churro. Sounds like an episode of Two and a Half Men.

After a night of dinner, drinks and valet parking, Lyndsey just wants to go to sleep and offers Alan $20 to let her do so. He refuses, so she kicks him out of bed and he joins Walden in front of the TV. Walden is trying to learn to drink, because he wants an additional way to wallow over his ex-wife. Alan suggests they watch TV, and they end up on a late-night adult channel featuring a man and woman in a 16th century kitchen. It takes Alan longer than Walden to realize that the female star is Lyndsey.

The next morning, Alan refuses to talk–or do anything–with Lyndsey, but doesn’t tell her why. After she leaves, Alan tries to talk to Berta about the situation, but she leaves mid-conversation out of boredom. Good ol’ Berta. Walden shows up and announces his only takeaway from Lyndsey’s film: he wants to learn how to bake.

At Lyndsey’s house, Alan tells her that he saw the film and she explains that the casting director said he could get her on Melrose Place. (He didn’t lie: Courtney Thorne-Smith did indeed star in Melrose Place.) Lyndsey says she was ashamed about it and didn’t want anyone to know, and they proceed to discuss all of the things Alan has done that he doesn’t want anyone to know. It’s a long list, ranging from a peanut butter and dog scenario to possibly being the father of Judith and Herb’s child. It ends with the fact that he stole Lyndsey’s diamond earrings from his ex-wife. That gets him kicked out.

“I’m baking brownies and Berta’s making my head into a dream catcher.” Back at the beach house, Berta has taught Walden to make magic brownies. Alan has no luck explaining to them that he and Lyndsey broke up. Berta’s advice is to never be completely honest unless the paramedic asks you what you took. Walden says he took two brownies and a peach Snapple. Even in his current state, Walden expresses that it’s hard when the person you love doesn’t love you back, and Berta reassures him that he doesn’t have to love her back.

Alan leaves an apologetic message for Lyndsey and asks that she doesn’t tell anyone about his tainted past. Heading back to the living room, Walden surprises Alan with a bikini party. There are girls, an Alan sundae, and Walden having visions of a giant cat holding a churro. Lyndsey knocks on the door and Walden answers. She asks for Alan, and it takes Walden a few trips back to the door to confirm that she’s looking for Alan. To protect him, Walden tosses Alan over the deck and returns to tell Lyndsey that Alan isn’t there. Alan returns, covered in whipped cream and dirt, and Walden says he looks “ucky.”

At Lyndsey’s house, Alan is forgiven because she can’t fault him for being honest. She asks where he was when she came to the house, and given their conversation, he decides to tell the truth. He gets kicked out again.

It’s time to move on, Alan.