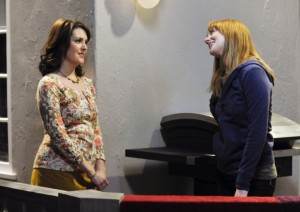 With the lovely Zoe in his life, Walden is finally over Bridget–just in time for her to change her mind about the divorce and go all Rose on him. At least Bridget has help from the master on her journey to craziness, with Melanie Lynskey making a brief guest appearance as Rose at the end of this week’s episode of Two and a Half Men.

Ready to jump into a new commitment, Walden invites Zoe out to witness him signing his divorce papers. How romantic. He immediately wants to make Christmas plans and Valentine’s Day plans, but Zoe thinks that’s going too quickly so they settle on dinner in Mexico with the help of Walden’s private jet. 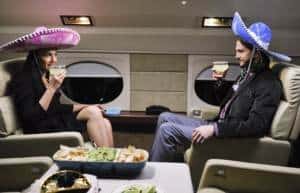 The flight to Mexico is completely over the top: sombreros, guacamole, and a diamond necklace for Zoe. At this point, Zoe thinks Walden is out of his mind and is reluctant to accept the gift. Walden asks, “What about getting a diamond necklace for a girl you haven’t slept with yet while flying to Mexico for dinner on your private jet is crazy?” Even he realizes it when he says it out loud.

But then Zoe learns that Walden also pulled some strings at the private kindergarten that she was trying to get her child into. That does it for Zoe, and they consummate their slowly progressing relationship on the plane (and this is where Walden provides the title of the episode).

All is well in Walden’s world until he’s back at home and Bridget shows up. It seems that she’s shocked that Walden actually signed the divorce papers, and now that it’s becoming reality she has changed her mind. She wants him back. I previously liked Bridget for being the only woman on Two and a Half Men who would dare to give Walden up, but now she has shown her true colors: she can’t stand not being in control of him. 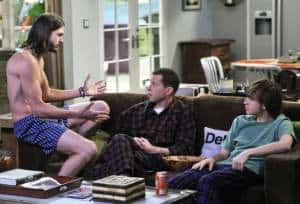 Walden, after having such a hard time letting her go, has a relatively easy time not letting her back in. She does manage to get him up to his bedroom and stripped down as much as network television allows, but he manages to escape so he can get sound advice from Alan and Jake. Alan asks Walden what his heart is telling him, and he says Bridget is the past and Zoe is the future, but if he gets back together with Bridget, he won’t lose $600 million in the divorce settlement. Alan thinks that’s a no-brainer: go with Bridget. Walden says that would be easy, because he’d just sell the beach house and move back in with her. Alan needs to stop that in its tracks: go with Zoe. Jake’s only advice after hearing that Walden was “in a pickle,” was to suggest that he follow his pickle.

After being convinced to go with Zoe, Walden goes to break the news to Bridget, who has put on lingerie and arranged herself in bed. He tells her that although she’s the ex real deal, Zoe is the next real deal. He’s quite pleased with himself for that phrase. He offers a handshake and asks to be friends, and Bridget runs out of the house while telling him to drop dead. Alan and Jake look on, wondering how many times they’ve seen this movie. Jake thinks the house is built on a burial ground for angry women.

Bridget is one of those angry women–she drives her car through the house and her craziness is initiated. Some time later, she’s on the deck spying on Walden having dinner with Zoe when Rose shows up. Rose asks, “Do you want him back, or do you want him to suffer?” When Bridget isn’t sure, Rose explains that it’s okay, because the path there is often the same thing.

When Bridget and Rose jump off the deck, we know Bridget will become Walden’s Rose. I’m not thrilled about this turn of events, although it was great to see Melanie Lynskey again, albeit briefly. Charlie always accepting Rose despite the fact that she was a stalker was always unsettling, and I don’t think the scenario needs to be duplicated. Keeping Rose around would be enough crazy for Two and a Half Men.