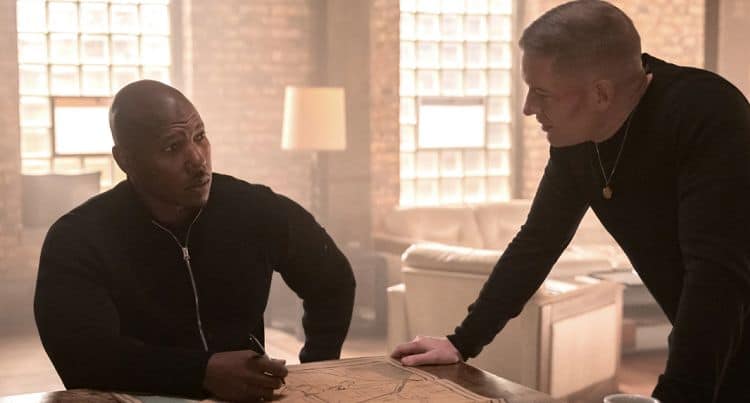 In Power Book IV: Force Season 1, Episode 9, Walter Flynn convinced Claudia and Victor that Tommy was responsible for Gloria’s murder and the hit put out on Victor. Although Claudia knew Tommy better than either her father or Vic, she chose to ride with her family. With his back against the wall, Tommy made a deal with the Serbians since the Flynns were also planning to go to war with them.

Are You Ready For War?

In Power Book IV: Force Season 1, Episode 10, the finale after D-Mac is shot and left fighting for his life in the hospital, Tommy is out for blood. “Are you ready for war?” Tommy taunts Vic Flynn on the phone because after obtaining an army of the Serb’s support at a very high cost, he’s feeling confident about winning the war against the Flynns and the Irish mob they’ve brought in for reinforcement. Vic does admit that he had nothing to do with the driveby shooting that nearly claimed D-Mac’s life. Tommy realizes that the move was sloppy and too street style, unlike the Four Horsemen’s tactical style. After briefly speaking to D-Mac in the hospital (whose now awake and out of the woods), Tommy finds out that there is someone related to CBI that knows their location. If someone took a shot at Tommy from CBI, Jenard moved against Diamond.

Jenard has been thinking about making a power move against his brother Diamond ever since he came home from prison. Diamond’s preference to play it safe these days doesn’t align with CBI morale. For a minute, we thought that Jenard’s plans to force him out of CBI died when his best friend and right-hand man did when they stole the Serb’s territory. But Diamond’s somewhat of a friendship with Tommy further alienated him from his brother.

Jenard sent a group of his men after Diamond at the barbershop after confirming that he was there. Fortunately, Diamond escaped in time. But Diamond still needs confirmation that his brother ordered a hit on him. So, he kidnaps Blaxton, Jenard’s new number two. He beats the truth out of him. Blaxton admits that Jenard is the one that ordered the hit because Diamond has become too soft. Blaxton doesn’t think Diamond has the heart to catch another body. Diamond surprises him by putting a bullet in his head. Diamond leaves the body on Jenard’s dining room table.

Liliana and Tommy move the Dahlia laboratory to a secret location along with Lauryn, the chemist. Liliana cuts Lauryn a break by giving her a large sum of money to get out of town. Liliana knows that once Tommy starts not to trust her, he will no longer have any use for her. Of course, this turns out to be a big mistake since Liliani didn’t safely see her out of town. Now that he’s made an enemy out of his brother and his righthand man is dead, Jenard is desperate for help in taking his brother down. He makes a deal with the Serbs to get the Flynns to agree to a peace treaty since, in turn, they would withdraw their support from Tommy.

Walter Flynn immediately agrees as neither side is eager to lose their men. In addition, without the support of the Serbs, Tommy is a lone wolf. However, neither the Serbs nor the Flynns are willing to get involved in the family war between Jenard and Diamond. Vic is furious that his father would even consider making a deal with the Serbs since they had a hand in Gloria’s death. Claudia corners Jenard and offers him a job as the distributor of Dahlia in exchange for the truth about Tommy’s involvement in the hit on Vic. Jenard admits that Tommy had nothing to do with it. Finally, the truth comes out when they are in a full-blown war.

Claudia has been making big girl moves in the season finale. Not only did she figure out the best way to get to Tommy, which was by kidnapping his brother JP but she’s also planning on making a move towards dethroning her father. Now that the Flynns are holding JP hostage and Tommy realizes that he can’t trust the Serbs, Tommy allies with Diamond, who’s also on his own. Tommy, Liliana, and Diamond meet up with the Flynns and Jenard. Gunfire erupts, and the war finally comes to a head.  Claudia ends up shooting Liliana. Diamond has the chance to kill his brother, but he can’t bring himself to do it. Instead, Diamond agrees to divide CBI territory and tells Jenard to allow the members that want to come to his side to come.

Tommy manages to get the upper hand on Vic, and he holds him at gunpoint in exchange for JP. Claudia reveals to Vic that their father ordered the hit on Gloria and had her killed and framed Tommy for it. Walter Flynn tries to deny the claims, but Claudia can get her brother to see the truth. Walter Flynn agrees to let JP go, and Tommy releases Vic. Vic attacks his father, who taunts him for being weak and unable to kill him now that he knows the truth. Tommy tends to Liliana, desperate for help, but she dies in his arms. Tommy is torn up over Liliana’s death as she was loyal to him and the last piece of his former life in New York. Claudia tries to make things right, offering him a piece of Dahlia, but Tommy wants nothing to do with the Flynns. He promises to take everything that they have.