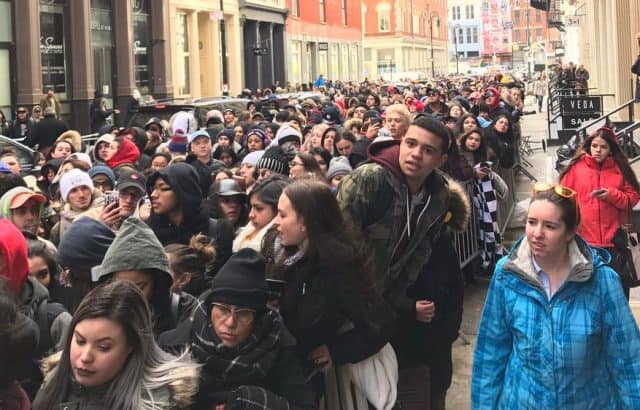 I rarely post Kardashian and Jenner related information but when I see something like this I have to.   A NYC pop-up shop is opened yesterday at 10am and at the shop Kylie Jenner’s cosmetics were being sold.  Jenner herself told her 87.5 million followers about it on Instagram.  What actually ensued yesterday was a spectacle I don’t think we’ll ever see for anyone’s cosmetic’s ever.  According to Circa

About 40 hours before Kylie Jenner’s NYC pop-up shop opened on Monday at 10 a.m.,  a handful of fans started hanging around the SoHo spot to be the first customers. And the line kept growing. Kylie sent out the location to her 85.7 million followers less than a week ago. Fans lined up around the block to buy Kylie’s cosmetics and brand-new clothing line. Some of the first people in line had been waiting since 5 p.m. Saturday. The Kylie Shop officially opens online tomorrow on Valentine’s Day.

I’m willing to bet money that if you do a tally of the people that showed up for this vs. those that showed up for Trump’s inauguration you would get very comparable numbers.  What is going on with our country?  This is what you line up for?  I’m not going to get any sleep tonight knowing that this is what our youth cares for more than anything else.  Seriously, that’s what this is.  You’d rather be NOWHERE than the opening of a shop that carries Kylie Jenner cosmetics?  There are no words.  But there is video.  Check it out below: