Home
Movies
Trippy Green Code in ‘The Matrix’ Is a Bunch of Sushi Recipes, Really 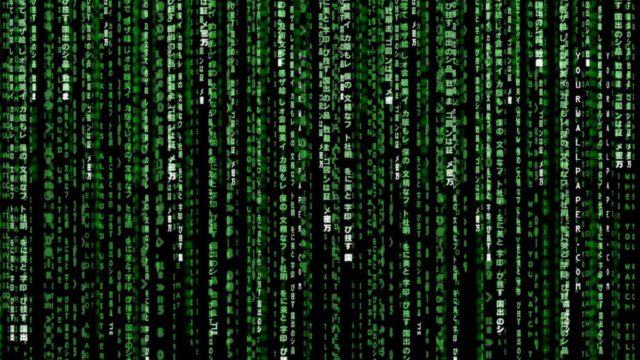 That’s pretty sneaky to work something into the film in such a way. To think that all those lines of code are nothing more than sushi recipes is kind of difficult at first, but if you look at each individual line you might start realizing that they are not indecipherable lines of code, but very familiar characters that you might have seen in many a film to date. If you’ve ever taken Japanese as a college course you might have had to study a good number of these characters over and over in an attempt to get their meaning. I can remember many a night spent awake staring at these figures until they appeared to be dancing on the page I was so tired.

You simply know at this point that movie geeks, and I say that with respect, will be poring over each and every line in this long, long list trying to sort out just what is what. Best of luck to them but the odds of finding them all out is going to be kind of an arduous task.

Most people just figured that this was a lot of code being thrown at them for effect, something to get them in the right frame of mind for what was about to come. And for the most part it worked since to be honest and truthful a lot of people didn’t bother wondering what it was or what it represented. There were those that were attempting to decipher this insane code so as to figure out what it was really saying and possibly decode the Matrix. But really, if it wasn’t what it’s been revealed as then who’s to say that it would have been anything but a series of random symbols being thrown about so as to explain the complexity of the Matrix?

Movie geeks tend to go a little too far sometimes it would seem, especially when it has to do with ascribing meaning to something that might literally have none. In their defense a lot of directors and cinematographers do tend to do pretty much everything with some meaning affixed to it and don’t waste a lot of time on meaningless effects, but learning the truth of the Matrix code is just kind of funny. It’s not so much a slap in the face to all of those who were attempting to sort out the meaning as it is a loud, braying foghorn to clear the air and let everyone know that they can stop searching for something that wasn’t there to begin with. Kind of like a ‘here it is’ moment when the answer was right in front of everyone the entire time.

So yes, without the recipes for sushi that were used there would be NO Matrix, at least that’s the popular theory/joke. The theorists and conspiracy-lovers can take a seat and let their brains cool for a while now that the secret is out. Oh and if you manage to decipher a few lines take some time to order up a tasty treat.