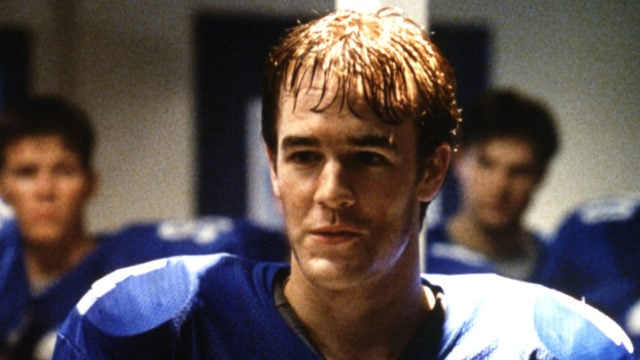 As soon as you hear the guitar solo begin you know, it’s go time. There’s no other way to describe this song as it builds and builds and builds into something powerful enough to get your head nodding and your feet tapping as you wait for that one moment when the lead singer rips into the song. Thunderstruck is perhaps one of the greatest tracks to ever place in a movie, particularly in moments of tension, excitement, and of course, utter hilarity that calls for a very distinctive track.

Here are just a few movies in which Thunderstruck has played a powerful role.

The first movie was a power struggle between a dad and a stepdad, the second is kind of explanation of how each dad came to be the way they are. The granddads are in town and they’re here to show the kids just what it can be like when you get the older and the current version of a person. Let’s just assume that Dusty’s dad is going to be the more aggressive role model while Brad’s dad is going to be the nurturing and possibly over-protective type that smothers people with affection.

This is one of the most perfect uses of this song and it captures the moment perfectly considering what the crew is setting off to do. Fire and rescue is a vastly important role in forestry and is taken very seriously by those that do it. The chance to save lives and preserve nature is a responsibility that many take a great amount of pride in. But that doesn’t necessarily mean that they have to be serious all the time. After all, what better way to get pumped for a mission than to put on a killer track to get prepped with?

This kind of puts a new spin on the song. How would you feel if you’d fathered over 500 kids? Thunderstruck might be putting it a little lightly, but tired and overwhelmed would no doubt be a little closer to reality. Now assume that you could keep your identity a secret if you wanted, but what you knew you really needed was a change in your life. Would that get you to peek at their profiles just once? I kind of hope most of us would say yes.

When the new technology and state of the art ships are knocked out of play and there’s nothing left, the old salts tend to become the last line of defense. While the movie didn’t get rave reviews the intensity of this scene is simply awesome, and the emotion within the last half hour of the movie is just so powerful that you can’t help but feel some measure of pride when a battleship that’s been docked for so long finally enters the fray and turns the tide.

This is the price of a late night right before a game. Anyone that’s ever played football in their life would be able to tell you that what you do the night before, you will pay for on the day of the game.  It might have been fun, it might have been needed, but suffering through a hangover during a football game is one of the absolute last things that any athlete wants to do.

Thunderstruck is just an awesome song and can bolster pretty much any movie. ‘Nuff said.