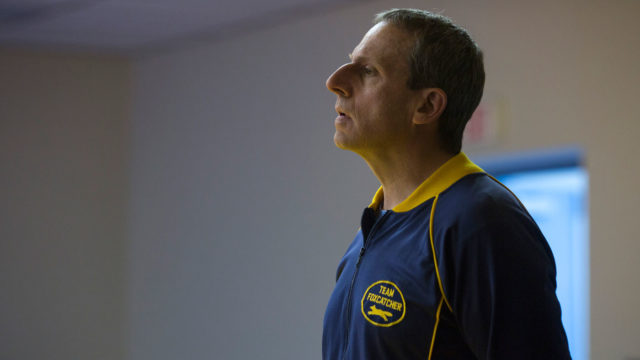 It’s a strange thing when comedians decide to take on serious roles, but give credit to Steve Carrell because when he gets into he really gets into it. There’s no half-measures with this guy since you either end up liking him and pulling for him or absolutely hating him. His characters tend to be so real that you can’t help but think that he’s a bit like Daniel Day-Lewis in some ways, that he keeps to the character even when the film isn’t rolling so that he doesn’t break character at all. That would be a good way to explain how he’s able to deliver such profound roles in this manner, but it could also be that he’s just that focused and into his roles.

A lot of people would prefer him to be funny, but being able to be serious gives him a lot more depth as an actor.

When the housing market collapsed, which actually happened, a lot of people were simply out of luck and the banks’ reply was basically ‘oh well’. This left a lot of people high and dry and while the character of Mark Baum managed to get in and get what he could from the mistake the banks had made, he was still determined to see that they were made to apologize and admit to what they did. The only problem there was depending on big corporations to actually admit a mistake when they could just fade off into the sunset and say absolutely nothing.

Some coaches push because they realize the potential of their athletes and want to help them release every last bit of greatness that they have in order to do something phenomenal. But du Pont is an aggressive and very negative influence that is actually pretty selfish as well. His motives are his own and he cares about what he can do to attain glory through the athletes that he selects for his team. That’s about it really.

Trent is a hard character to watch Carrell play. Even though he’s played the role of the jerk the comedic performances that he’s given in the past have kind of eased the sting of it a bit. This guy is just unrepentant and doesn’t seem to realize just how much he’s hurting his girlfriend and her son by being himself. He says things to the kid that are just rude and hurtful, and he flirts around with his ex-girlfriend while saying nothing of it to his current girlfriend. Yeah, Trent is a slime.

2. Battle of the Sexes-Bobby Riggs

This was a real life story that took place and was meant to be kind of a joke in the eyes of some but became a very serious match between Billie Jean King and Robert Riggs. King would eventually win the match but it was a struggle to even get to that point since at that time, and even now, women’s tennis has been considered an inferior sport to men’s tennis. The inequality of the two is still in question today but the match that took place decades ago did in fact start something that is still discussed with today’s athletes.

1. Seeking A Friend for the End of the World-Dodge

When you’re facing down a worldwide extinction a lot of silly things you thought mattered once no longer seem to have much meaning. The only thing that matters is that you have someone you can spend the last remaining days of your life with, especially if it’s someone you’ve come to care about. Mortality does a lot of strange things, but it can also allow people to focus on what’s really important.

He’s just as good as a serious character as he is a funny one.