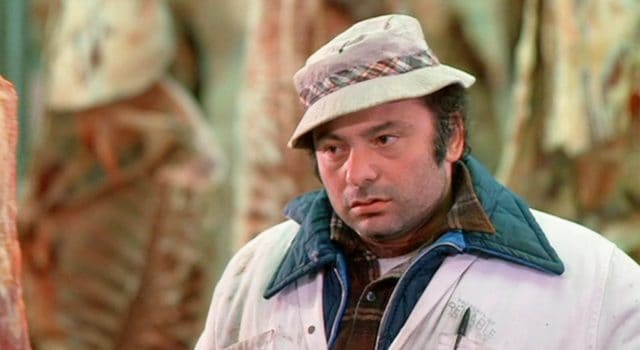 One thing you can say about Paulie from the Rocky movies is that he’s kind of a jerk. He thinks about himself a lot and doesn’t really come around until it’s really needed. Of course then he kind of reverts back to being the same old Paulie yet again and you wonder why you liked him in the first place. He gets sweeter the more dire the situation gets, especially when it involves him in some way. And yet he’s still one of the more memorable parts of the Rocky franchise, the guy that ‘don’t sweat nobody’ and would stand up to anyone until it’s proven that he’s not that tough.

Paulie has never been the most stable guy. When Rocky started training for his fight with Apollo he had to quit working for his boss the loan shark. When Rocky didn’t automatically recommend Paulie as a suitable replacement for him Paulie kind of went off the deep end and tried to pick a fight with Rocky, which wasn’t the first or last time. Thankfully he calmed down eventually, but it wasn’t a high point of the friendship.

By Rocky II Paulie was doing the same job that Rocky had been doing but was obviously enjoying the perks a little more. He didn’t act like the bum he used to be, he acted like an entitled jerk at times but he at least still had Rocky’s back. The only difference now was that since things were going good for him it almost seemed like he pitied Rocky. Ah Paulie, when things were up for him pity for others came easy.

Near the end of his days Paulie was still Rocky’s best friend and still kind of a nuisance but not as much. When he got fired from his longtime job though he didn’t take it too well. He still had Rocky’s back like always, but was at this point kind of a broken down old man with nothing left except his friend and a whole life filled with questionable choices.

Paulie did have emotional moments when he acted like a decent human being. That kind of came to a head in this moment when he admitted that he would want to be more like Rocky. This short but heartfelt speech might have served as just a bit of inspiration going into the fight with Drago, and of course Paulie had to add ‘now blast this guy’s teeth out!” as a closer. Hey, it’s Paulie.

Remember when Paulie wasn’t that impressed with Rocky’s newfound fame? He was even less impressed with Tommy Gunn’s since Tommy was invited into their home and allowed to take over his nephew’s room. But when Tommy turned on Rocky and straight up abandoned him for a title shot Paulie was more than ready to come to Rocky’s defense. This shows that for as hard as he was to like that he really did care.

He just had an odd way of showing it is all.