The Real Housewives of New York City are back for another season of female bonding, urban high fashion, back stabbing and big blow out fights all caught on camera as they prepare for Luann’s controversial wedding, a presidential election and greet the arrival of yet another new addition to the “housewife” cast, Tinsley Mortimer. There is, of course, never a dull moment when the ladies get together.

Here are five of the top moments of RHONY Season 9.

Ramona can never quit when she is ahead. In episode 3 she had some great comeback at the ready for Carole, who implied that the business savvy blonde is not “informed” about politics. Ramona graciously proposed that people have a different way of seeing things and interjected her own ditzy comic relief when she asked “Who’s going low, Who’s going high? Then she tried changing the topic and Ramona got that wild look in her eye which always signals drama. She actually asked Bethenny if anyone had approached her daughter who is just six years old about her mother’s “soft porn” movie. Yup, she did that and the fun car went off the rails as usual.

Dorinda is a classy lady but when something gets her riled up, all bets are off. Sonja was feeling left out so Dorinda’s answer was to throw some jabs about Sonja talking to the press about everybody. When Sonja tried to act innocent, Dorinda told her to “Shut Your Mouth!” Then she really got personal with Sonja about her cosmetic procedures on her lady parts,

3. Sonja’s and Tinsley’s Honeymoon is Over

Sonja took in her gal pal Tinsley when she came back to New York but by episode 8 she is tired of sharing–first her friends and now her personal assistant! That’s where she draws the line. Tinsley will have to bring in her own packages–oh the horror.

Is Romana actually surprised that she did not get an invite to Luann and Tom’s wedding? Apparently she is and in her own Romana style she is still wheedling for an invitation, just so that she can not show up, according to some of the other housewives. Things get even worse when Romana tells Luann that people are placing bets on the wedding. This season Ramona never looked better but she still hasn’t installed a filter on her comments

Bethenny Frankel can really throw some serious shade but when she finally met Luann’s intended in person she was quite gracious. She actually apologized for the drama with last year’s cheating video that she revealed to Luann.. This proves that “B” can be a real sweetheart when she tries. Though she can be quite caustic to her enemies, she will go the extra mile for her friends. 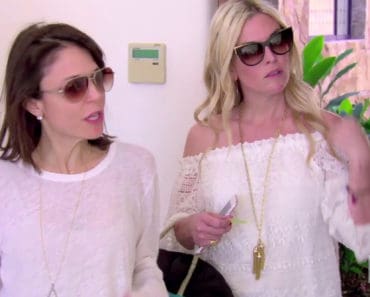