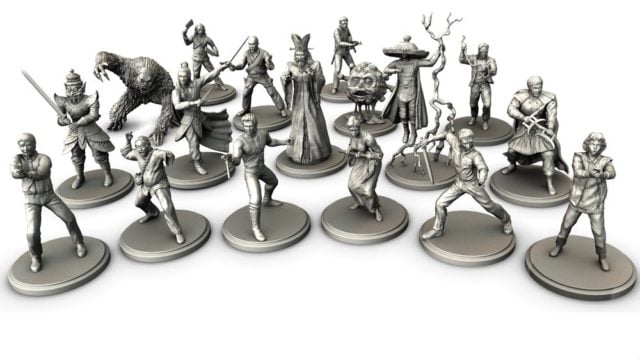 If you are in your 30s there’s a very good chance you’ve seen John Carpenter’s classic 80s movie Big Trouble in Little China.  If you have children or know any teens out there, I think it’s imperative that you force them to watch this piece of cinematic brilliance.   I mean this movie was Street Fighter II before it existed in the arcade.  This film was Mortal Kombat before it took over Sega Genesis.  This is a movie that spawned super natural creatures and myth in movies.   I cannot emphasis enough how great this film is.    And now, some 30 years later there’s a board game out based on the movie!

Here’s a previously released description of Big Trouble in Little China: The Game:

It’s a thematic, cooperative, strategy, miniatures, adventure game that allows 1-4 players to experience the events they remember from the film as well as create new adventures of their own. The game plays in two acts: Act One uses the front side of the game board: Chinatown, while Act Two takes place on the back: Lo Pan’s lair. Players will choose from six characters, each with unique abilities, and will use custom dice for actions, quest tasks and combat. They will also be able to use the communal fate dice, which come with a fun risk/reward mechanic. After completing quests and upgrading their characters, players will move to the back of the board for the big showdown with Lo Pan! Will the heroes stop Lo Pan’s evil scheme in time, or is everything gonna go to hell?

And here’s the trailer: