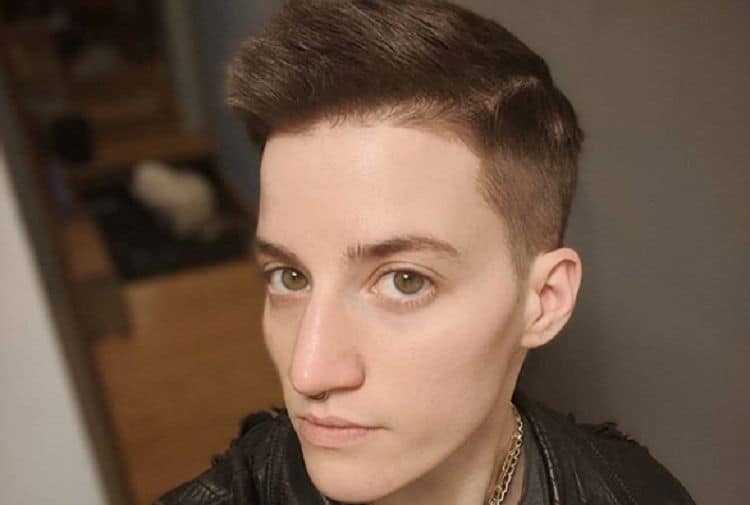 You likely know him for his role in the Netflix series ‘The Politician’. The actor plays the androgynous James Sullivan on the show, and since its release and popularity growth, Theo Germaine has watched professional success grow as well. But Germaine didn’t just fall out of the sky when the program came to television, suddenly appearing in the role and gathering attention the work being done. No, there is a history there, just like with anyone else. So, what does that history consist of, anyway?

Well, there are a few things, to say the least, and we’re going to discuss them now. After all, it simply won’t do to watch someone on television all the time while knowing exactly nothing about them, their life, or their career, now would it? No, it wouldn’t. We feel the same way, and we knew about as much as you did…before now, that is. In an effort to expand your knowledge along with our own, we decided to share the facts that we’ve learned about this talented newcomer.

Below you will find ten little-known facts about the actor Theo Germaine. But, you may say, mostly everything about out there regarding this person is pretty vague so far. You’d be correct. But how else do fans get to know the actors who portray the characters they watch and love on television and in the movies? We share the information we learn as we learn it. So put what you think you know aside and read on to discover more about this talented actor from ‘The Politician’.

Here are 10 things you didn’t know about Theo Germaine:

1. Where Germaine Is From

Germaine is originally from Illinois, and was working as a Chicago coffee shop employee until landing his ‘Politician’ role. When the part was landed, Theo relocated to Los Angeles to make filming more convenient. However, this is supposedly a temporary move, and staying in LA to live isn’t in long-term plans.

2. A Breakthrough Year…And the Public’s Confusion

The first season’s end saw ‘The Politician’ quickly becoming a hit with fans, and the performers on the show were beginning to realize the potential for their own future success because of it. Germaine, in particular, has been considered one with great potential. But soon fan’s began to voice their feelings of confusion. Is Theo Germaine male or female? The transgender actor has had fans on the edge of their seats, to say the least. Well, to answer the question gallantly, we will say that identifying the sex of a transgender individual can be difficult without going straight to the source. Theo says that, while he was female, he has gone through legitimate transformation, and is male.

While still pretty much new to the scene, the role of James Sullivan is not the first part played by Germaine. He played the part of Baby in 2019’s ‘The Holy Trinity’, and the part of Carlisle in ‘Adam’ in the same year. Now he is working on one of his most promising roles yet: He has been cast as Chris in the new Showtime Original series ‘Work In Progress’, which is being called one of the smartest and most real comedy shows released in a long time. It sounds like the sky is the limit for Theo.

As is common with actors and others on the forefront of show business, Germaine has found himself interested in other aspects of the industry. In an interview with MTV he talks about how his gender, or rather, the question of it, was never touched upon in ‘The Politician’. This fact proved to be something of a relief. But the fact is that Hollywood and its cohorts tend to dance around the issue without making anything of substance about the reality of the topic or putting out quality work about it. This has inspired Theo to get into the realms of writing and directing. The creative outlets in those positions hold much more power for the creator, and that would mean serious change in this particular arena in the future. To put it simply, it would help to minimize, and eventually eliminate, the typecasting that takes place.

5. His Hope for the Hollywood of Tomorrow

On the same token, Germaine would like to see trans performers who have all the opportunities as anyone else. For example, if a trans female is perfect for a male role, why not give it to her rather than typecasting her simply as trans? On this subject, he is quoted as saying, “I want to see trans actors in major projects, like Marvel movies and rom-coms, and just have all the opportunities that other actors have been given for forever”.

In high school, Theo was involved with theater, but was typecast into female roles due to not having come out yet. Then, after landing the part of James on ‘The Politician’, he had scenes where James and Alice (protagonist Payton’s girlfriend) have something of a relationship behind Payton’s back. Regarding this, Theo told Them, “One of the scenes I got to audition with was around that secret relationship, and I was like, ‘Oh, my God! I get to be the other man? That’s so exciting!’ I know that maybe he wasn’t necessarily doing a good thing, but I want to be able to do things where I’m not the good person.” It certainly shows his ability to be versatile in roles.

7. On Taking the Lead

Germaine admits that he didn’t have the best childhood, and that there were times he was homeless. He also says that the sudden change of his success takes some getting used to, but that he was able to gain confidence through his role on ‘The Politician, and it’s a confidence that he has carried over into his role on ‘Work In Progress’. Coincidentally, Theo has the romantic lead on the new Showtime comedy, a part he says he never thought he would be able to play. Thanks to ‘The Politician’, however, he has the confidence to not only step into the part successfully, but to run with it as well.

While we can’t get down to the nitty-gritty details about Theo’s life due to lack of information, we can give you the basics. He was born in 1988 and brought up in Murphysboro, Illinois. According to all sources, his given name is Theo Germaine. Theo attended the University of Illinois at Urbana-Champaign for college. As far as ‘gender’ clarification, he considers himself a ‘non-binary transgender’, meaning that he doesn’t identify any more or any less with one sex or another, though he has opted to lean toward the male of the species identity-wise. Theo prefers the use of the pronouns ‘he’ and ‘they’ when referencing him.

Germaine considers himself to be gay, and he is not single. He enjoys a healthy relationship with long-time Chicago friend/boyfriend William Rusan, whom the actor refers affectionately to as his ‘Mr. Perfect’. The pair have been together for some time. Rusan, according to his Twitter page, is a ‘humanist, feminist, technologist, mediaist, socionaut, weirdo, and nerd trying to make the world a little easier.’

Theo has only been acting professionally since 2019, and currently has a total of four different credits to his name. To date, the media has not officially released his net worth, but a leak in the press stated that the number is around $100k, which is pretty good when considering the number of parts he’s had, the amount of time he’s worked, and the fact that he was only making an average of $10 per hour at his cafÃ© job in Chicago. We’re willing to bet that he’s not complaining.