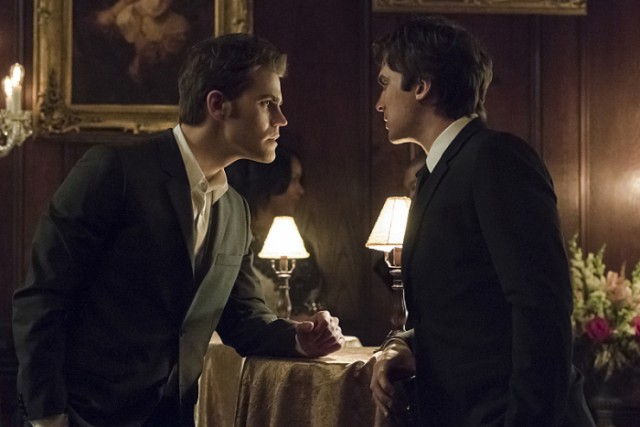 Major bombshells were dropped on The Vampire Diaries that will shake up the series.  To quote the great Gwen Stefani, this stuff is bananas. B-a-n-a-n-a-s!  Seriously though, everything I thought about the future timeline was blown to pieces starting with the reveal of Caroline’s fiance.  There’s also a case of contagious baby fever going around town with the other huge surprise.  Spoiler alert!

Alaric is honestly one of the last characters I would have ever thought Caroline would be engaged to three years down the line.  Matt, Tyler, or even a new guy would have made much more sense.  How do they end up there?  Well, the fact that they’re raising Ric and Jo’s twins together probably had a whole lot to do with it!  As of right now, my mind is boggled at the possibility of this.  Sure, the babies are Gemini witches, but how did they magically transfer into Caroline’s body?  She’s a vampire.  And why Caroline?  Did the Gemini coven just pick her out at the wedding because she looked like a suitable surrogate to carry on their bloodline?  When Valerie started doing the tracking spell to locate the babies she believed to still be alive, I thought it was a ridiculous concept that some human out in the world is carrying these witch babies they’d have to be compelled to forget or whatever.  Nope.  Instead we’re just as confused as Caroline and Ric.  Given Candice King’s pregnancy in real life, this makes sense in hindsight, but I wonder how much of an influence that had on the storyline direction.  It seems almost too wacky to comprehend, and yet I get the distinct feeling the permanent time jump will occur just before we get to see the beginning of this relationship.  In a different setting under far less supernatural influences, this is basically the premise of Jane the Virgin now.  I would sort of love to see Car and Ric grow closer after the birth of these twins.

Back in the present, we see the seeds being planted for another future relationship.  Bonnie and Enzo were revealed to be a couple last week in the flash-forward, and ever since then, they’re getting more screen time together to make this pairing a lot more believable.  They’re on the same page with each other regarding Enzo’s unrequited feelings for Lily, which Bonnie tries to help him with by playing along with his game to make Lily jealous.  I can’t say that tie adjustment worked for that exact reason, but it did spark a chemistry between the two for now.

Bonnie’s never been one to get so hung up on a guy, so I don’t see that ever changing about her.  She’s already onto the next shocking discovery in town with Matt’s help when they follow a strange waiter to the high school.  Clearly compelled, there’s a classroom full of people hooked up to IV lines.  Since Mystic Falls is otherwise deserted, this must be the doing of the Heretics.

Lily doesn’t have as much control over her little family as she thinks.  She’s already lost the trust of Valerie after she was caught trying to kill Julian before she could resurrect him.  Now that he’s back and her real sons are now united in their front to kill him, Julian seems to need all of the Heretics together for his next plan to ensure the Salvatores don’t succeed in taking him out.  All Stefan had to do was be honest with Damon in the first place, and they could’ve killed him together rather than Stefan stupidly trying it alone.  Plus, did he honestly think it could be that easy to kill an ancient vampire in a house with a handful of equally ancient vampire/witches?

Stefan and Damon’s talk about their own father and the similarities between him and Julian brings about their own regrets and wishes.  Stefan comes clean about the pregnancy that Julian ended, and Damon shares his and Elena’s dreams to have their own children.  I can’t wait to see how they handle the news of Caroline’s surprise, especially Stefan.

How did you react to the shocking reveals in this episode of The Vampire Dairies?