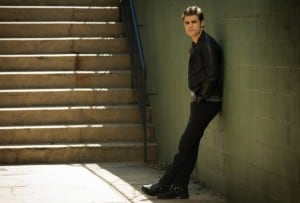 It’s time to celebrate the festive season in Mystic Falls, a time of peace and good will on The Vampire Diaries, right? Not if Klaus (Joseph Morgan) has anything to say about it as he demonstrates what happens when his hybrids go rogue. There are other sire bond issues as Damon (Ian Somerhalder) struggles with letting Elena (Nina Dobrev) go, while keeping Stefan (Paul Wesley) in the dark.

Family and trust are the main themes of this episode and both are key to the show as a whole; these are two things that are constantly challenged and torn apart (literally in some cases). Jeremy (Steven R. McQueen), thanks to his hunter status is now conditioned to kill vampires, any vampire no matter how he feels about them. The Gilbert family has been hit hard with Jeremy and Elena being the last two and so this desire to kill his sister is something that needs to be rectified; something that happens thanks to Jeremy’s warm and fuzzy feelings towards Bonnie (Kat Graham). 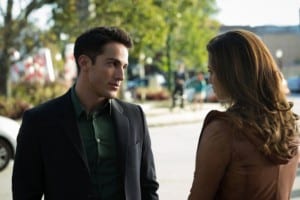 The Gilbert’s are not alone in experiencing deaths in the family members since The Vampire Diaries started, in fact all our major characters have lost at least one parental figure or sibling. This episode saw the loss of another with Carol Lockwood (Susan Walters) landing in the crosshairs of Klaus’ post-rampage rage. Liz Forbes (Marguerite MacIntyre) is now the last remaining parent, until either Bonnie’s dad or Matt’s (Zach Roerig) mom rock back into town. The death rate of parents in this town is rather high, so it might be best if they stay away and continue to ignore their parental duties (though I think Melinda Clarke is great, so would love it if she came back for Matt).

Klaus claims that all he wants is people around him that he can trust, but he just ends up killing them and finding himself alone. He has done this to his family, to the women who wrote him love letters and now to his hybrids. Some of these connections, particularly the ones with his hybrids are built on shaky ground; they are only loyal to him because of a sire bond. Others like Klaus’ family were killed because they couldn’t give him what he needed, even though someone like Rebekah (Claire Holt) would do almost anything for her brother; this wasn’t enough. There is a fundamental flaw in what Klaus expects from people and as he describes why he keeps those letters to Stefan (equating it with Stefan’s Ripper wall writing) it is clear that Klaus’ problem will always be that he wants power over his nearest and dearest. Sadly being a megalomaniac isn’t the best way to get friends and find love, because of this Klaus will probably always be “infinitely and utterly alone.” 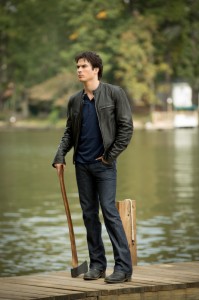 When Klaus tells Stefan that he’s probably the best friend Stefan has, there’s probably a part of him that truly believes this as he sees Stefan as someone who is very much like him. The major difference is that Stefan has real people who are close to him and not just because he makes them that way. Lexi (Arielle Kebbel) and Caroline (Candice Accola) are both examples of this and no matter what happens between Stefan and Damon, they would never do to each other what Klaus has done to his siblings. Though after finding out about Elena and Damon, Stefan will have to control his emotions.

Now Damon and Elena are over before they really had a chance to get going, with Damon staying with Jeremy to help him with his hunter training. There are of course going to be some emotional repercussions now that Stefan knows and when we return in January this love triangle will be as complicated and contentious as ever. What I’m interested in as a result of the lake house trip is still Professor Shane’s (David Alpay) motives; he mentions a dead wife and son to Elena and the tale of Silas. Shane now has 12 human sacrifices with Professor Young, but why does he also need 12 hybrids? As I have previously said the slow burn of this story is really effective, especially as the pieces are coming together.

-Professor Shady Pants is an appropriate nickname for Shane and considering all that Bonnie has been through, she is way too trusting. Shane does seem to know how to manipulate the vulnerable; Bonnie with magic and Hayley (Phoebe Tonkin) with the promise of who her real parents are.

-Tyler already hates Klaus, so when he finds out that his mother is dead he’s going to want revenge.

-Does Caroline have any romantic feelings for Klaus? Or is she just good at playing the flirty champagne drinking distraction?

-Oh April, now you know where Rebekah is. Will she pull out the dagger?

-The use of festive music plus a hybrid massacre was jarring, but very effective. The whole soundtrack for the episode was fun and one of my favorite Christmas songs is used near the start of the episode; Julian Casablancas’ “I Wish it Was Christmas Today.”

-The Hunter’s Mark is not just a map, but also contains the spell to obtaining the cure.

-So long hybrids, we hardly knew you. Once again Tyler is the only one of Klaus’ collection left.

When we return in January things are going to be tense as Elena returns home, leaving Damon at the lake house. Klaus is not going to be in the best of moods as he was deceived from all angles and Tyler is going to be in danger, while also seeking revenge. For a look at the promo for the January 17 episode “After School Special” head here.