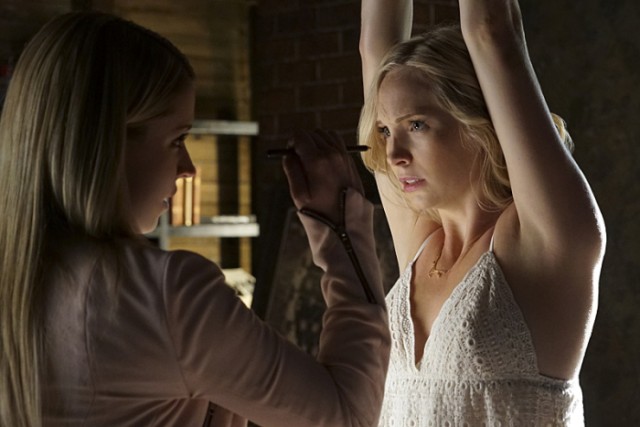 Parts of The Vampire Diaries this week felt very familiar, down to the episode title, which is, in fact, the song connected to a key Damon and Elena moment in history: their first kiss.  Even though Elena’s out of commission for the next few decades, her presence is strong as ever.

In fact, I almost expected Elena to wake up out of her coffin when the teenagers were sneaking into Mystic Falls before the Heretics found and fed on them.  Of course, Matt’s on duty and gives it his best shot at saving these innocent lives, but let’s be real here: he’s no match for witch/vampire hybrids, no matter how powerful his blue eyes are.  Lily and her band of children takes this opportunity to drain the vervain from Matt and compel him after signing the deed to the Salvatore house in his name.  By the way, it shouldn’t have taken the Salvatore brothers all too long to figure it out since I believe Matt may be the only human left in Mystic Falls, aside from the housekeeper (aka the new owner of the house by the end of the episode).

The not-surprising solution to this problem is to kill Matt, which has been done too many times already!  Bonnie’s heart-stopping spell works almost too well as she suffers some kind of vision that knocked her out temporarily.  Matt is revived but still angry.  Angry at Damon, mostly because he’s the easiest target, and it seems all roads lead back to him.  It was nice to see Bonnie own up to her part in all of this since she played a role in Malcolm’s death last week.  Either way, Matt’s sick and tired of these Heretics and what they’ve done to his hometown.  Can’t wait to see what he and Bonnie cook up next to get rid of them.

Damon’s got an idea of his own on how he and Stefan can deal with their mother.  They tried to be nice and civil but she’s a cold-hearted woman.  Honestly, it sounds like she’s always been that way if she tormented Damon as a kid by taking all his toys away when he wouldn’t confess to breaking a vase.  A century later, and she’s still finding ways to punish her boys.  If she truly only considers the Heretics her family, though, I have to wonder why she cares enough to tease Stefan and Damon by taking their respective girlfriends.  Damon’s willing to take his chances by holding up his end of a deal that means he has to leave town for good in exchange for Elena’s body not to be harmed.  He reveals to Stefan that he plans on finding the sixth Heretic that hasn’t surfaced in town yet and using him as leverage in a negotiation with Lily.  Good luck with that, Damon.  Seriously, he’s gonna need lots of luck and maybe a Bennett witch at his side if he stands any chance at corralling a Heretic.

For now, Caroline’s gaining some perspective on the Heretics from the inside.  Valerie comes off as being the more friendly one, but her motives are shady.  One of the other girls told Caroline that Valerie’s been carrying Stefan’s diary around with her ever since they were trapped in their prison world.  It seems they may have a past, which could possibly point to Valerie as being the ticked-off woman chasing after Stefan in Brooklyn in the future.

The flash forwards are my favorite part of the season.  I just love the opening and closing scenes each week so far, slowly dropping information but not enough for any of it to make sense yet.  Now we see Caroline will be working at a local Dallas news station in the future.  She’s engaged but not to Stefan.  In fact, when her assistant tells her she got another phone call from a Mr. Stefan Salvatore, Caroline specifically says she doesn’t want to speak to him or hear his name.  All this rules out Caroline as the crazed mystery woman at least.  It also brings up another important question about the future: who is she engaged to?  It’s more than likely someone we already know since the message from her fiance was about planning a trip back to Mystic Falls before the wedding.  Tyler, Matt, Enzo?  And are we to now assume that Valerie is the main suspect as this mystery woman after Stefan?

Last week, Lily mentioned a very important stone to Enzo that was stolen from the Maritime Museum in New York.  Somehow, Alaric heard of this phoenix stone from his travels and pulled off the heist himself.  He’s waited until now to get Bonnie’s opinion on it, and she gets nothing but bad vibes from it.  She literally called it evil incarnate.  Instead of trusting Alaric to get rid of the stone himself, she should’ve volunteered to do the dirty work because there’s no way he’s not going to use it to bring Jo back to life.  I was actually thinking, though, how cool would it be if instead of Jo, he dug up Jenna and brought her back?  Whoever comes back to life with its powers will no doubt be pure evil, so how much fun would it be to get a blast from the past with a whole new side of Aunt Jenna?  We’ll more than likely only get to see a very monstrous Jo when the time comes for Alaric to use the stone on her.

The phoenix stone has some relevance to Lily and her Heretics, which all play a role in leading up to that exciting future.  Personally, I can’t wait until we’re all caught up with this time jump.  What about you?  Are you enjoying this season so far?