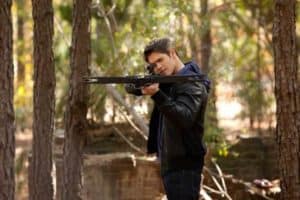 It has been a long time since we were last in Mystic Falls but The Vampire Diaries returned tonight with an emotionally charged episode, which deals with the repercussions of the failed killing Klaus (Joseph Morgan) plan from the mid-season finale. The fallout is of course amplified by Stefan’s (Paul Wesley) choice to get even with Klaus by stealing Klaus’ family coffin collection. This puts those close to Elena (Nina Dobrev) in danger that leads to a big decision. Another major event occurs in this episode but that will be covered in detail further below…

One thing I particularly like about The Vampire Diaries is that secrets aren’t kept for long and whilst some other shows would have dragged Stefan’s betrayal out over a few episodes, this show has Stefan revealing the truth to Damon (Ian Somerhalder) when he is first confronted by his brother. Damon and Stefan discuss this in true Salvatore fashion; with furrowed brows, some passive aggressive dialogue and some actual aggressive action involving some good old fashioned staking. Tension filled scenes between Damon and Stefan are a favourite so I’m glad to see that they will be working together on a Klaus plan; expect more furrowed brows.

Stefan doesn’t know what will kill Klaus but I like that he is smart enough to know that there must be another way. Stefan is also smart enough to get the witches involved with this plan and utilizes both the dead ones and Bonnie (Kat Graham) to help keep the coffins hidden. Bonnie’s dream sequence that opens the episode is suitably creepy and focused on one coffin and the big mystery here is that it can’t be opened; who or what is in there? Is it really the answer to their problems? 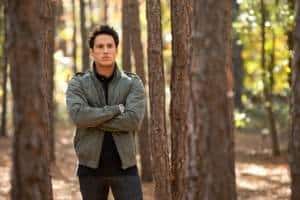 One obstacle with Klaus is that he has amassed plenty of loyal hybrid ‘followers’ who are more than willing to carry out his orders. This includes Tyler (Michael Trevino) who Klaus uses to put Jeremy (Steven R. McQueen) in danger. Tyler of course doesn’t understand at first that Klaus is trying to send a message by getting Jeremy killed. Tyler tries to explain to Elena and Alaric (Matt Davis) what he believes to be the difference between compulsion and being sired; compulsion is all about mind control whereas being sired is about faith. Both compulsion and being sired have the same results, and whereas there is a way to prevent compulsion with vervain the same can’t be said for Tyler’s condition.

Tyler is still able to warn Jeremy that Klaus is still after them and this leads to a pretty gruesome scene on the doorstep of the Gilbert house (the same doorstep where something else major happens). For once the knife collection from the Gilbert kitchen is used to protect rather than harm this family, as Jeremy takes the cleaver and makes sure that Tony (Zane Stephens) the hybrid is dead by hacking his head off. It is this action that pushes Elena’s Jeremy plan into action as she decides that he really needs to get away from Mystic Falls. We are reminded in this episode of how young Jeremy is and how much he has been through and Elena’s hard decision to use Jeremy’s vervain free status to compel him to safety is one that she believes is necessary. It truly is as heartbreaking as the first time when Jeremy was compelled back in season 1 after Vicki’s death and when he finds out what Elena has done again will he be able to forgive her this time? How or when Jeremy will be back is unclear but I’m sure when he does return to Mystic Falls there will be fireworks.

This show is consistently about family and siblings and we are once again reminded of how much family means to Klaus by both Stefan and his coffin quest and with Elena as she returned Rebekah (Claire Holt) to her brother. This seems like a dangerous move by Elena especially as she revealed that she was the one who daggered Rebekah. Elena also informed Klaus that Rebekah also knows the truth about really happened to their mother; a piece of information that probably influenced Klaus re-daggering his sister just as she was about to wake. 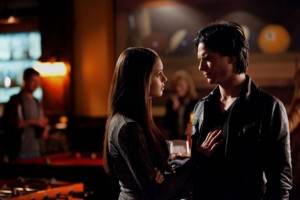 So to that big moment that I haven’t properly mentioned yet and yes they finally kissed! By ‘they’ I of course mean Damon and Elena and I’m sure this moment had many fans exclaiming their happiness (and has probably cashed Tumblr with gifs).

It appears to be the right time for this moment to happen; the tension has been building since the death bed kiss at the end of last season and it seems like these two characters are at the right place for it to happen now. If it had happened earlier in the season it would have felt disingenuous to the relationship that Elena had had with Stefan and at this moment all feelings that Elena had for Stefan have disappeared with his humanity.

It will be interesting to see where they go from here and how this will complicate matters further, but I’m sure some fans aren’t looking to what will happen in the future but are just happy that this has finally happened. Whilst I have no real preference over who Elena chooses (I’m Team Salvatore) I think that this is an interesting development and I look forward to how this changes the character dynamics.

-The dead witches are still mad at Damon; they really are an unforgiving bunch. Can they inflict the same kind of pain on Klaus?

-Sadly Tony the hybrid was not driving a Hybrid when he ran Alaric over (I know this is a terrible play on words but I had to do it).

-We met the beautiful Dr Fell (Torrey DeVitto) tonight who was impressed and intrigued by Alaric’s quick healing and the two shared a flirty moment. Dr Fell appears to be part of one of the Founding families so does she know more about his healing abilities? Also should we be concerned that Alaric’s ring only revived him but didn’t heal his wounds (thank Damon and his blood for that)? Does the ring have a limited amount of power depending on how the death blow is received?

-Always the teacher, Alaric is concerned with Jeremy’s essay that he copied off the internet but really if you had to put up with all things supernatural wouldn’t you put school work to the end of the to do list?!

-Stefan really doesn’t care about Elena or her family as he seems nonplussed about the danger he has put any of them in. This earns him a well deserved slap and pushes any of those old feelings that Elena has for Stefan further away.

-Though Stefan cares enough about his brother to save him; this is an action that confuses both Damon and Elena and causes Damon to feel guilt. Though this guilt also leads him to act on his impulses.

This sure was a big return for The Vampire Diaries with Jeremy being compelled to leave town for an indefinite amount of time and that big kiss finally happening between Damon and Elena. Are you glad to see that moment finally happen? What do you think Stefan and Damon’s big plan will be? Is Tyler going to try and free himself from his Klaus bond? Let us know your thoughts in the comments below.