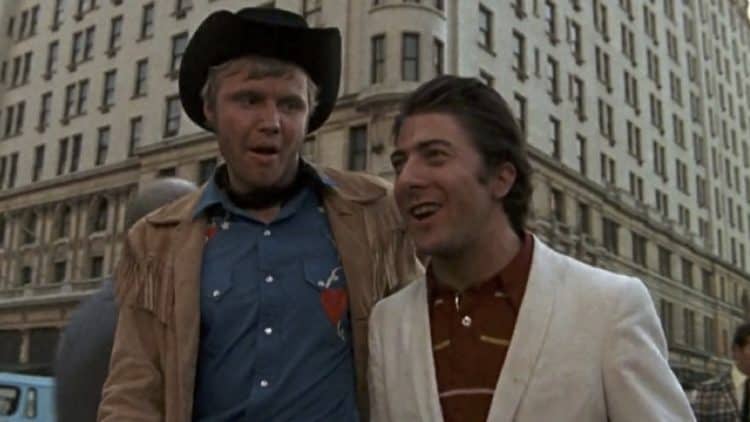 This is one of the loosest lists ever made since finding a cowboy character in a big city scene in a movie isn’t hard, it’s finding one that that’s memorable in any way since there are some that people might recall, and then there are those that people might think count because the person that played a big-city character was at one time a cowboy in another movie. But the essence, the spirit of the cowboy is what we’re looking at here, not just the clothing or the actual title, so it broadens things up a bit since that laid back, kick your boots up and just settle in kind of feeling is something that a lot of people might have, but is usually indicative of a cowboy in this case. Their temperament can be different from person to person, their personalities might be different, and it’s very easy to think that they’re every bit as different as anyone else. But there are a few qualities that keep them easy to identify in the movies, and it usually has to do with one element or another that’s been made pretty obvious.

Here are some of the most authentic cowboy figures in movies.

The big city back in the days of the Newton boys gang wasn’t exactly what it is now, but that didn’t make much of a difference since Hawke’s character of Jess was no doubt the most untamed of the bunch and he enjoyed it immensely. If he wasn’t out riding or breaking horses in he was enjoying the good life in the circus or drinking himself into a stupor, possibly with a woman nearby if he had the money to keep her happy. Jess’s role in the movie was kind of the loose cannon of the bunch, but he knew when to mind his older brother well enough, and to be certain he was the comic relief as well.

It was actually nice to see Eggsy and Merlin taken down so swiftly when they showed so little respect for Agent Tequila and the Statesmen, but apart from that, it would be interesting to know just who would win in a head to head fight between the two younger men since it they’re both highly trained and skilled operatives that know how to use what’s available to them. Saying that Tequila managed to get the drop on Merlin and Eggsy is too much of an excuse since both of them could easily say that they weren’t expecting a fight. But all in all, a tussle would be fun to see who’s the better fighter.

If anyone ever said that Joe Buck was intelligent in any way they might have been grossly exaggerating since the guy is little more than a dishwasher with big dreams that turned into a hustler that lost his only friend for no good reason other than Ratso was sick, to begin with. But saying that Joe was out of place in the big city is like saying that a bull doesn’t belong in a fine china shop, since things were bound to end badly no matter which way one turned. Some characters are simply built to be kind of dim and the actors that take on such roles do their best to make it appear that way. In this case, both Voight and Hoffman did a great job.

It’s kind of impossible to look at Sam Elliott and then listen to him and not think ‘cowboy’. In Ghost Rider, he appeared as a regular old caretaker that was content to keep to himself and tend the dead. But learning that he was Carter Slade was a decent part of the movie even if it was a bit predictable. He still played his part just fine since he’s a great actor and too hard to dislike most of the time. In fact, almost every character he’s ever played has been roughly the same, even if there are a few that don’t really give off the cowboy vibe quite as much. He’s definitely one of the last and best cowboy characters around.

People might be looking at this and wondering what in the hell I’m thinking but the fact of the matter is that Jones did play Three-Fingered Jack in The Legend of Zorro with Antonio Banderas, and he played a slick, hustling politician that had a kind of modern cowboy vibe to him in Casino. The only problem was that he was set up to be just as much of a villain as the rest of the bunch since he had no intention of dealing fairly with the mafia, who were dealing unfairly with the people of Las Vegas. In a sense, it was kind of a game to see who could be the most vicious.

The cowboy spirit won’t ever die, that’s for certain.