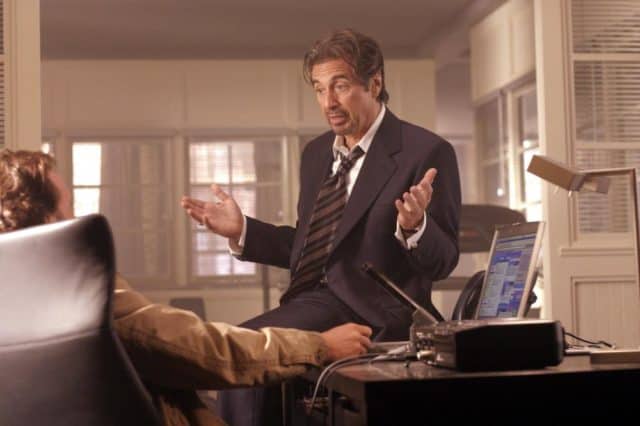 Al Pacino is an American actor, screenwriter, and filmmaker who was born in Manhattan, New York City, on April 25, 1940. As he has a career that spans five decades he has appeared in many successful films and received numerous awards. In 1969, he made his feature film debut in ‘Me, Natalie’. He is best-known for his roles in movies such as ‘The Godfather’, ‘Serpico’, ‘Dog Day Afternoon’, and ‘Justice for All’. Despite the huge success of the majority of his movies, some have been significantly less successful. Here are the five worst movies Al Pacino has been in during his acting career.

This American thriller was released in 2007. It was written by Gary Scott Thompson and was directed by Jon Avnet. Al Pacino plays the lead role in the movie, Dr. Jack Gramm, a forensic psychiatrist. In the movie, Pacino’s character has to testify in a murder trial. Other people starring in this movie include Alicia Witt, William Forsythe, Leelee Sobieski, Amy Brenneman, Neal McDonough, Deborah Kara Unger, and Ben McKenzie. This movie was received negatively and was nominated for two Razzie Awards; one for Al Pacino for Worst Actor and Leelee Sobieski for Worst Supporting Actress.

Released in 2002, ‘People I Know’ is a crime drama film in which Pacino plays Eli Wurman, a Jewish publicist. It is written by Jon Robin Baitz and directed by Daniel Algrant. Other people starring in this movie include Kim Basinger, Ryan O’Neal, and Tea Leoni. The reviews for this movie were mixed but predominantly scathing. In fact, it was described as incoherent and derivative.

3. Two for the Money

In this sports drama, Al Pacino plays the role of Walter Abrams opposite Matthew McConaughey as Brandon Lang. This 2005 movie was written by Dan Gilroy and directed by D.J. Caruso. Others who starred alongside Pacino and McConaughey in this move about sports gambling include Rene Russo, Armand Assante, Carly Pope, Jaime King, and Jeremy Piven. The movie received poor reviews and, despite a production budget of $35 million, ‘Two for the Money’ grossed only $30,526,509 at the box office worldwide.

‘’The Recruit’ was co-written by Roger Towne, Kurt Wimmer, and Mitch Glazer. This spy thriller movie was released in 2003 and was directed by Roger Donaldson. Pacino plays Walter Burke, the lead role and other stars of this movie include Colin Farrell, Bridget Moynahan, and Gabriel Macht. The movie received many poor reviews and was criticized for its inaccuracies regarding the CIA.

‘Bobby Deerfield’ is one of the earlier films in Pacino’s career and critics panned the movie for being melodramatic and over-the-top. In this 1977 romantic drama film, Pacino plays the role of Bobby, a Formula One auto racer. The movie was written by Alvin Sargent and Sydney Pollack directed and produced the film. Others who starred alongside Pacino in this movie flop were Marthe Keller and Anny Duperey. The movie grossed just over $9 million at the box office.