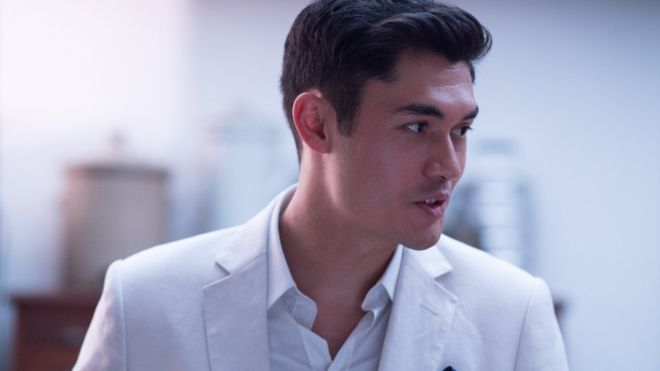 Sometimes it seems like some actors genuinely get a lucky break and find themselves being cast in a blockbuster movie. What a lot of folks don’t see is how hard those actors have been working in productions that haven’t gone anywhere and are willing to take just about anything. In Henry Golding’s case however the movie Crazy Rich Asians was a godsend that he was more than lucky to get considering that he had next to no credits to his name and no possible way that he should have been able to win out against several other individuals that might have been more experienced. But it happened, and it was obviously the right move as he’s been lauded as a very important part of the movie.

He’s been on TV, but as a presenter and travel host for the BBC and Discovery Channel, never an actor. He’s made his way through one area after another and has been seen as the kind of guide that can take a person where they’ve never been before, but he’s never set foot on a film set with intent to act. Crazy Rich Asians was just the beginning as well since not long after he went on to star with Anna Kendrick and Blake Lively in A Simple Favor before moving on to Monsoon. You could say that Henry has become something of a superstar almost overnight since each of these movies have placed him in a leading role and without so much as a single leading credit to his resume. Many people are still wondering just where he came from, but no one is doubting the veracity of his talent.

Finding him was the biggest challenge in fact. A lot of the Crazy Rich Asians cast had already been locked in by 2016, but they hadn’t found the leading man just yet. All they knew was the the male lead had to be someone suave, debonair, and yet down to earth enough to be easy to relate to when it came to the audience. Plus, he had to be able to nail down a British accent and be absolutely and undeniably attractive. For a while the producers and the director were starting to get a bit frustrated since a lot of the candidates had one or two of the qualities but not all of them. They were looking for someone they hadn’t seen yet, a standout among the many that had never yet been considered for a leading role. Amazingly it was someone within the director’s Asian network that mentioned Golding, meaning someone who knew someone who knew someone had seen Golding presenting an award show once and had become quite smitten with him. At that point the director was willing to take a look and found Golding to be everything he needed and wanted for the film.

After watching a few Instagram videos, taking a look at his profile, and getting a better feel for the man and what he was about, the director then found a way to contact him and got in touch with Henry. Golding had just gotten done with a series called Surviving Borneo, which had taken a great deal out of him by the time he was done. The director asked Golding, who had already been thinking of leaning into acting at that point, to send him some material after reading for the part of the leading man in the movie. At first he was a bit stiff it seems, but as he was given more time and the opportunity to get it right, which he did eventually, much to the delight of the production crew.

From that point it was just a matter of announcing that he’d joined the cast, and people were all over him. Casting an unknown in a major film is usually something that a lot of directors wouldn’t think of doing, but in this case it allowed Crazy Rich Asians to actually poke its head up and be noticed. Of course for all the talk that was going around in various circles there was bound to be some that wasn’t wholly positive. Since Henry is half-white it’s believed that the film was trying to whitewash the role as other films have been accused of doing. The obvious answer to this is that Henry got the part because he tried, not because he was in some position to benefit from any part of his heritage. Henry has been seen as an Asian man for a lot of his life but he does have English roots as well. He’s been pretty secure with himself for a long time and as a result he didn’t take the criticisms of his being half-white to heart. Quite honestly the gossip is about as troublesome as a cloudy day.