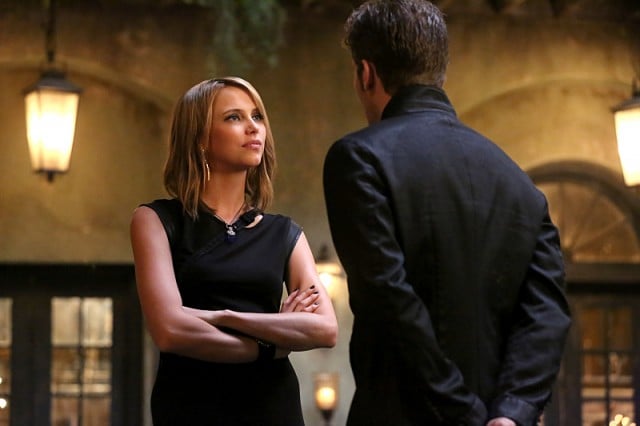 The Originals picked up the pace a little bit on this week’s episode after that slow season premiere.  Still, I remain slightly underwhelmed as it feels like we’re taking baby steps (literally because Hope is walking now!) towards anything of substance actually happening.

Let’s look at the newest shady character in town: Lucien.  He’s connected to the recent rash of murders because duh – why wouldn’t he be?  He’s also behind the wolf hunting that resulted in the loss of many of the Crescent wolves.  His motives for returning to town are shady in themselves.  It was his prophetic friend who tipped Klaus off to his family’s prophesied demise.  It’s also Lucien who’s now told both Mikaelson brothers about the looming threat between bloodlines.  My question is, why now?  They’ve all been alive for centuries now, so what’s the deal with Lucien, Aurora and Tristan to be fighting all of a sudden?  Are they even fighting yet, though?  We’ll have to see Lucien’s reaction to Tristan’s visit to New Orleans.

The most exciting scenes involved a fierce Hayley back in action.  She and Jackson are freed from their curse but only by Davina’s good graces.  At least Hayley has to continue to be Davina’s hit girl.  It remains to be seen if Jackson has any debts to pay or if he’s only allowed his freedom out of the kindness of Davina’s heart.  Hayley’s already got witch blood on her hands.  Her involvement in the massacre will no doubt be found out, and there will be consequences to pay and more enemies made.

It’s nice and convenient for Elijah to have hooked Hayley and Jackson up with an apartment right across the street from Klaus’ compound.  This way, they get their private space but Hope is never too far from the rest of her family.  Klaus and Hayley’s fight was more of a verbal sparring between a few leaps and bounds until Hope walked out.  Klaus stopped fighting back because his daughter was there, but he also may have actually been listening to what Hayley was saying.  All she wants is for Hope to have better parents than either of them did.  Klaus certainly can’t argue that he had a storybook childhood.  His actions, while twisted at times, all prove his unconditional love for his daughter.  He would hate to admit it, but I think he’s going to try to be civil with Hayley.

Having a witch for a sister definitely comes in handy.  First, for an attempt at locating Hayley, then to get a confirmation of the foreboding prophecy.  Freya does indeed confirm this vision with the blood still in Klaus’ system.  She takes it one step further by managing to read that her three siblings’ downfalls will be “one by friend, one by foe, and one by family.”  Kinda spooky, but is anyone really shocked?  The original family has enemies all over the world.  Klaus has a temper that should scare everyone, so he could very well be the one to kill a sibling himself.  As for friends, well, those are limited and loyalties fluctuate with the wind.