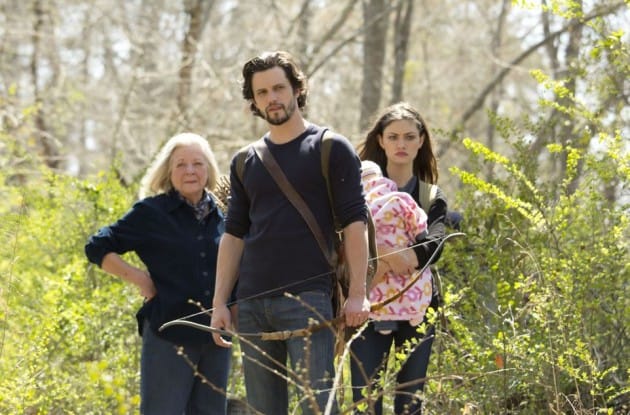 The action was really ramped up on The Originals last night to prepare us for the season finale next week.  The Mikaelson family appears to be more separated than ever but the writers worked their special magic to throw a devilishly clever twist in there.

Klaus never goes into battle without being prepared, and this time is no different.  Of course, he had to keep his true plans under wraps in order to appear convincing enough for dear Aunt Dahlia.  Remember when he agreed to side with her against his own siblings and anyone standing in the way of Hope?  Turns out Klaus is as selfish as ever, and I love it.  He never planned on allowing Dahlia close enough to his daughter to bind her powers to her.  Sure, he was very convincing when sacrificing Gia in front of Elijah and then turning Tunde’s blade on his brother.  He probably did get a kick out of that small act of revenge for Elijah staking him in the heart.

It’s hard to tell what his plan was for Rebekah though.  By placing her in Marcel’s care with the instructions to kill her if she tried to get away, what was he hoping would happen?  In the preview for next week, Claire Holt is back as the original Rebekah.  I am so excited for that, but I really don’t like what this means for the future of the character.  Unless Holt’s available to come back full time next season, I get the sneaking suspicion this might be the end for Rebekah.  There’s no way they could or should bring a third actor in for the same character.

For a moment last night, I also thought Cami was a goner.  She was brave enough to stand up to Klaus, so sure that he wouldn’t kill her.  He didn’t, and he was probably grateful she showed up because he needed her for his plan to work accordingly.  Now that Dahlia will probably soon discover Cami as Klaus’ other weakness, though, I remain skeptical about her chances of surviving this season.

Hayley was screwed over in Klaus’ master plan, and he better have the intention of helping her once Dahlia is taken care of.  By Dahlia placing the crescent curse back on the wolves, they’re all stuck in wolf form.  I almost would have preferred Klaus just kill Jackson in front of Hayley because we all know that’s what’s going to happen sooner or later.  After Jack was so sweet about insisting on staying by Hayley’s side and she told him she loved him for the first time, I thought that was the kiss of death for him.

This all boils down to Dahlia versus Klaus.  Freya is rendered useless once again, as Dahlia sent her back into her century-long slumber early.  The only powerful witch left is Davina, but she’s become the new regent of New Orleans.  With all of the area covens under her reign, Davina has her own agenda.  First up is probably to resurrect Kol (although which form he’ll take is still unknown) and then kill the rest of his family.  Makes a whole lot of sense.  She needs to get over her issue with Klaus and see the bigger picture here.  If she felt so victimized by her own coven when she was sacrificed, she should sympathize with an even more innocent baby being targeted.

-”I’ve never been daggered.  Never realized it’s such an agonizing experience.  It does explain why my siblings loathe me.” -Klaus

-”Family defines you even if it does demand sacrifice.” -Freya