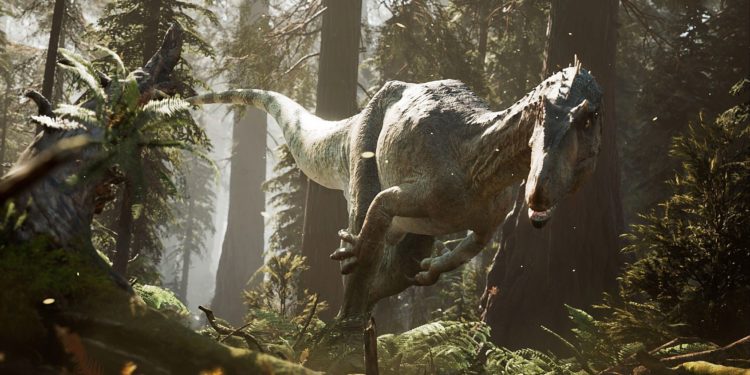 The Lost Wild is a re-introduction of dinosaurs into the gaming industry. Sure, there have been games that came out within the last couple of decades that featured these oversized lizards. However, they seem to have been on the wayside for the last two generations. Some would argue that programming the A.I. for these creatures was too problematic, or maybe designing them was limited due to memory. Whatever the case is, gamers have been clamoring for a new Turok: The Dinosaur Hunter and especially for a fresh Dino Crisis for years. If nothing else, a modern Jurassic Park game would have sufficed. Well, luckily the thunder lizards are beginning to rise out from the ashes of extinction and making their way onto players’ screens once again. The Lost Wild is the newest addition to this sub-genre and it seems to be the closest thing to an actual Jurassic World game that we’re going to have for some time.

The Lost Wild is basically a survival horror game that is a strange hybrid between Green Hell and Alien: Isolation. The story revolves around the protagonist stranded on an island that is home to a giant decimated Japanese facility that has dinosaurs running amok. It is up to the player to explore the island, gather clues and find out exactly what happened. The plot will unfold in real-time as players garner information through certain points in the game. The exposition will drip-feed throughout the playthrough in which will expose the history of the area and how the player can potentially escape. This game is both a mystery and horror tale that involves deep survivor instincts, wits, and detective skills.  The main selling point of The Lost Wild is the fact that there is virtually no combat to speak of. So, if players are hoping for a dinosaur blasting marathon, then they should try Second Extinction. This IP is an entirely different animal.

The main appeal to The Lost Wild is the A.I. that is associated with it. Developer Great Ape Games are clearly fans of the horror survival genre and they are pulling no stops on this title. The artificial intelligence will adapt to the way the gamer plays. Chances are, there will be some dinosaurs that will be dumb as rocks and they can be easily tricked. Thus, there will be others that will be highly intelligent and they will ambush and surprise the player on a whim. There appears to be a dynamic day and night system to where time rotates. When night falls, certain predators will come out from the dark and will actively hunt down the player. The Lost Wild is heavily influenced by stealthy horror survival games like the Outlast series and this dinosaur game is teeming with potential.

The dinosaurs will systematically change their patterns and behaviors depending on what the player chooses to do. If someone decides to run away, then they will be chased. If they decide to hide, then the dinosaur will try sniffing them out. There will be tons of resources to collect to where a player can experiment and try crafting items to increase chances of survival. The developers over at Great Ape Games are trying to create a new survival horror experience that breaks away from current tropes. The weapons that can be obtained in this game will be all within the “non-lethal” variety. Slaying these animals won’t be the main objective, but rather finding creative ways to repeal them. It may even be possible to lure them into attacking each other. There will be a food chain to keep in mind with The Lost Wild and it could be a very real factor with the gameplay.

Now, it is apparent that The Lost Wild will be played entirely from a first-person perspective. When it comes to survival horror games, this is the standard. This is mainly due to the fact that it ups the immersion and terror factor significantly. This game is being built from the ground up with the Unreal Engine and it looks rather impressive. Even though the trailer that is available is pre-Alpha, it looks like it is already fairly polished. Players will be taking control of a reporter named Saskia. This character is on the hunt for a hot story in which leads to this island. Not being a soldier or mercenary, firearms will be out of the question. Instead, makeshift weapons that range from torches and melee weapons will be the norm. Tools and emergency equipment will also be available, such as a flare gun for instance.

This game will be an entirely single-player adventure, that lasts around 6-10 hours long. However, this is not to say that this dinosaur trek will be a “walk in the park.” Instead, players will be constantly scavenging and fighting tooth and nail to survive. The island will be entirely explorable and the player will be encouraged to find new pathways. Some will lead to top Tier resources, which in turn will be a more harrowing journey. Great rewards equate to great risks in The Lost Wild. Players can go out and see what is out there if they dare. However, it won’t be entirely necessary to finish the game. Needless to say, there will be items out there to make this brutal playthrough less stressful. Once all the information is gathered and Saskia finally figures out what happened on this island, players will then be tasked with making a “heavy decision” on how to end this adventure.

Beyond The Great Valley

This new IP has the potential to really reinvigorate the dormant dinosaur sub-genre.  The trailer that is currently available gives players just enough information to glean on how it plays. Great Ape Games have been quietly crafting this title for about three years and their work is looking to be paying off. There is still much to unveil with The Lost Wild hopefully in the near future. Hopefully, Great Ape Games will give players a little more insight into what they have in store for us soon.