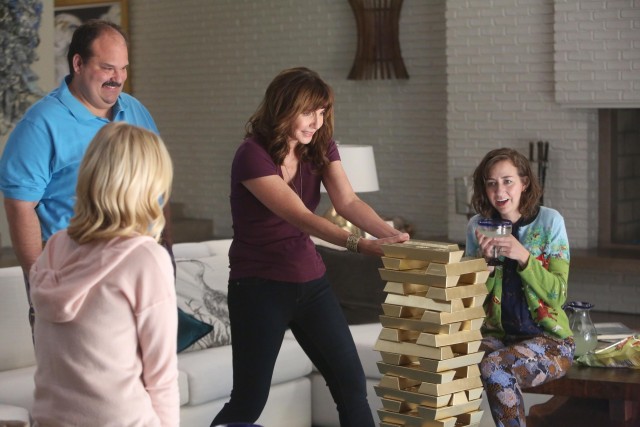 Outside of being jerks, there hasn’t been a lot of characterization given to the secondary players ofÂ The Last Man on Earth, save for a few bullet points: Phil 2.0 likes Carol, Erica’s got an Australian accent, Melissa is a flat piece of cardboard, so on and so forth. With such an extreme focus on Phil Tandy Miller in Season 1, these bits of character were never able to grow into three-dimensional portrayals, which flattens The Last Man on EarthÂ whenever the sow tries to expand and tell stories outside of Original Phil and Carol’s journey through the world. “Crickets” was the first episode built around rectifying this situation – and in the same vein, “A Real Live Wire” goes a long way towards rebuilding these characters from the ground up.

“A Real Live Wire” is probably the best non-season premiere episode ofÂ The Last Man on Earth;Â with definitive character arcs for the entire group, the half hourÂ movesÂ with purpose. Some of this can be felt in the smallest moments; Gail hiding her Gordon mannequin and Carol’s baby fever might not seem like the heartiest of character arcs, but they give immediate voice to their current states of mind, in ways organic to them, not introduced through Phil’s behavior. In fact, with Phil and Todd isolated in their friendship-rebuilding project to power the Malibu mansion Phil 2.0 thinks they need to leave behind, “A Real Live Wire” is tasked with giving everyone their own purpose without Phil as a catalyst, and to the episode’s credit, it does it quite effortlessly, engineering The Last Man on Earth‘sÂ most promising half hour in ages in the process.

And it all comes together in such a wonderful, fitting way. When Phil 2.0 reveals he’s in love with Carol (again) and announces he’s leaving Malibu, everything goes to hell, andÂ The Last Man on EarthÂ begins to find its place. We watch Carol hesitate as Phil 2.0 says she’s with “the wrong guy,” then Gail announces she’s pregnant, thus confirming Carol’s desire to have children (now that her child wouldn’t have to be alone). That final scene is the ‘live wire’ this show’s desperately needed, kicking a number of interesting conflicts into high gear in just a few minutes. Every relationship forged across two seasons is thrown into flux here, just as Phil 2.0 is pointing out the fundamental imbalances in their community, and how he no longer wants to be exposed to their nonsense (which, in itself, is a moment that makes Phil 2.0 a much more believable, layered character, turning his prick-ish nature into something based on existential frustration due to the people he finds himself surrounded by).

The handful of small twists thrown into those final moments openÂ The Last Man on EarthÂ up to any number of potentially intriguing hours moving forward. Finding direction for its secondary players has long beenÂ Last Man‘s biggest flaw, and “A Real Live Wire” takes long strides in the right direction to rectify those early mistakes. If the show can continue to build on these stories, we could be watching one of the more dynamic transformations of a comedy in recent memory, turning a series about a jerk trying to get laid into a group of broken people trying to get out of their own way long enough to survive, and being able to rebuild the world in a better light.Â That’sÂ the storyÂ we’ve been waiting for since people started arriving in Tucson; it feels likeÂ The Last Man on EarthÂ is finally workingÂ towards that in “A Real Live Wire,” and the results are immediate and endlessly satisfying.