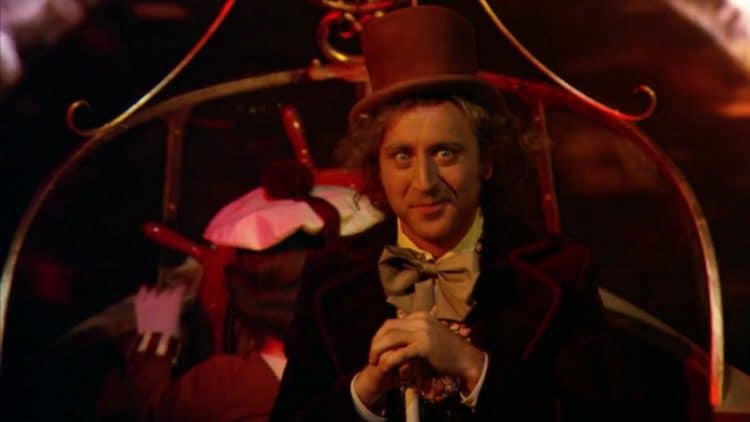 If Willy Wonka didn’t look or sound like a horror movie before it’s bound to now since these VFX artists are on a mission to make Willy Wonka and Charlie look like absolute maniacs when it comes to the whole story. The story has been laughed at and ridiculed for years concerning some of the more strange and less than comical aspects of it, but seeing the story turned into a horror-scape is kind of disturbing but also kind of funny since the lengths these guys went to make it happen were incredible. Obviously thanks to the lock down they have to do all of this from home, so there’s not as much corroborating as usual and they had to do the work on their own for the most part. But looking at the skill and the demented way they worked on their own parts, it’s not for certain who did Violet but the end result was just as gruesome, was simply hilarious. Some folks might think it’s a bit twisted to turn a movie such as this into a horror version, but while it is kind of disturbing it’s also something that one can’t help but cringe at and laugh with at the same time. The wonders of animation and the things it can do to various stories remains impressive as always since taking this movie and recreating it with a horrific twist is nothing less than spectacular in its own way.

The fact that Charlie is now a murderer that killed an old man for his golden ticket is kind of insane, especially as it’s shown that he goes home with blood still on his face from the kill and a look of childish excitement to go with it…and no one notices obviously. There’s only so much that can be done to the movie after all without having to go too far and redo so many things. But what happens to the naughty children as they proceed along the tour is pure genius since watching the movie the first time a lot of folks likely believed that these kids really did need a serious lesson, as did their parents at some point. Augustus Gloop was the first to go since the greedy little bugger couldn’t help but stuff everything he saw in his chubby face, including the ‘chocolate’ river which in this rendering is blood red thanks to being filled with various meat parts by the artists. But the idea that comes from Gloop being stuck in the tube is just pure nightmare fuel since the artist in question had an idea of chocolate actually shooting up Gloop’s rectum, thereby injecting him with liquid chocolate until the point at which his body could take no more and simply exploded, creating a vile mix that would have been worse than the actual stuff that made up the river in the movie.

Violet came next, and while we didn’t get to see her demise it was definitely implied as she was ground up and used to make various candies that would be marketed by the madman that Willy Wonka had obviously become. At this point it’s fair to say that in this version Wonka lured in five unsuspecting kids and their parents to introduce a new flavor to his line, but that’s a guess really. Anyway, once Veruca Salt steps up to the plate and throws her little hissy fit about wanting a golden goose she’s given the Plinko treatment as the hatch opens and she’s allowed to fall and hit every solid object on the way down, breaking probably at least half of the bones in her body if not more. It does make one think though that a bad golden egg would be given the same treatment. There must be one heck of a clean-up crew on Wonka’s staff. From there however we go to Mike Teevee who just had to try out Wonka’s new machine and in the process wound up pulling a “Galaxy Quest” as the designers said it, his molecules rearranging so horribly that he eventually melted into a puddle of goo. One might think that this would leave Charlie and his grandpa as the last two standing, and they were for the most part until Wonka sent them packing. In this version however, that’s when they go seeking out the bubble room and the fizzy drinks.

This time though when they’re headed towards the ceiling fan, no amount of burping can save them as Grandpa hits the fan first, coming back down in a rain of viscera and bite-sized pieces, while the fan eventually descends from the ceiling and purees poor Charlie as he’s stuck after the floor is sealed away, shutting him within the shaft. The movie was seen as kind of odd before, but now it’s positively terrifying.