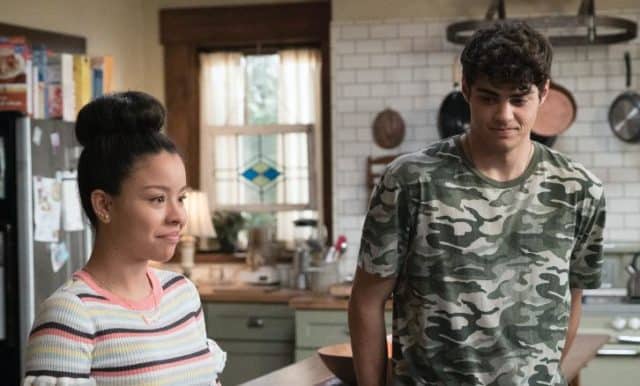 The Fosters has never been more relevant than it is now. This week’s episode hit every single note: LGBTQ intolerance with an emphasis on cyberbullying, the importance of education, immigration rights with an emphasis on the DACA program, police corruption, and most significant given recent events, civil disobedience. The perfect timing on the convergence of these storylines is morbidly ironic, but is providing paramount insight on today’s social issues. A particularly complex conversation between Callie and Aaron left the audience with a haunting message: “Be Careful How You Stand Up.” With this statement, a theme seems to be set for the rest of the season which will pay close attention to how different issues affect the Foster-Adams family. Where before the kids were unsure or ill-prepared to handle serious situations, they’re getting smarter about how to approach provocative topics; for the most part, anyways.

Let’s begin with some light drama that there has cleaner resolutions. If there is a list of the most awkward get-to-know-your-ex dinners, Brandon’s with Courtney and Grace would be in the Top 10. Because of the 1940s style quartet and the accordion player alone it would make the list. The good news is that Grace and Brandon have been practicing, and sound a million times better than they did at last week’s roller derby party. Brandon then gets back on the stage with Courtney to perform an adorable rendition of Shirley Temple’s “Animal Crackers”. This is enough to make Grace feel insecure. Add alcohol to the mix, and the result is not flattering. I always liked Courtney because she was honest and forced Brandon to face some hard truths about himself. That’s not to say she makes the smartest choices. No sooner does she confirm for the audience why Grace is a good fit for Brandon right now, than she gets caught in a lip-lock with Gabe!

If you haven’t heard, Mike and Ana are engaged. I’m happy as a clam, but others are, not unhappy per se, but perhaps concerned? For the most part any concerns all minuscule. They’ve become such a solid couple, and considering where they both were just a few years ago, who they are now is impressive. Without knowing what his biological father does at the end of the hour, Jesus gets it in his head that his biological parents could have a second chance. We don’t hear Gabe and Ana’s conversation afterwards, but in my mind it’s a final goodbye that closes the chapter on their mutual ‘what ifs’. They both went through hell to get to where they are now. Maybe it isn’t what they would have had if they had been able to raise the twins, but they’re in their children’s lives now. There is genuine understanding and healing for Gabe, Ana, Jesus, and Mariana that might not have happened had they not gone through everything that they had.

This isn’t something that Jesus can understand at this point in his life. He only sees everything that he could miss out on, and so wants to live his life all at once. He has legitimate concerns given how close he came to death. However, it is troubling that he only agrees to go back to school with an aide because Emma won’t agree to marry him if he rejects his education. That’s just the gist of what he believes, ignoring so much else of what Emma was trying to say. To be continued.

For being the only gay youth in the house, Jude has been very sheltered from LGBTQ issues until now. Because he is now a young adult, Jude is going to learn what it means to put yourself out there as a young gay man. Jude’s boyfriend Noah is shocked when Jude reveals he subscribes to a YouTube channel which casually throws out LGBT slurs. Jude’s argument that it is just a game does not please Noah, so they decide to post a counter-video with the same info as their subscriber, but without the slurs. The kids find out quickly how hateful people can be. It shocks and hurts Jude, but it doesn’t deter him. By creating their own channel, he and Taylor create a safe space for other teens who share their interests and could also do without the bigotry.

Callie was right all along about Kyle’s innocence. Now that everyone knows the truth, Kyle is out of prison, but he’s hardly safe. Stef is doing her very best to take down the corrupt detective who railroaded Kyle, but there is no guarantee that will happen. Callie’s innate sense of justice is what will make her great in whatever she chooses to do with her life. The more she learns, the more she wants to help people. She was able to help Kyle, and she was even able to help Lena feel comfortable with Mariana joining the roller derby team. Taking on politics in a public forum and at the college level is a huge step forward, but it could be a dangerous one. Callie faces that when she goes through civil disobedience training and faces the certainty that she will be arrested if she participates in a campus protest. Momentarily setting aside the fact that Callie just barely dodged going to prison, she and Aaron have different, but equally important views on the purpose of the protest. I can’t put into words how complex, compelling, and mature this conversation was as it brought up a wide spectrum of important points. See for yourself.

The Adams-Foster kids are growing in new ways now that the world around them is changing. Let us know who you most relate to in the comments.

The Fosters Season 5 Episode 6 Review: "Welcome To The Jungler"

The Fosters ramps up their discussions on complex social issues, with one particularly compelling conversation hitting every point there is.