Home
Television
The Flash
The Flash Season 1 Episode 12 Review: “Crazy For You” 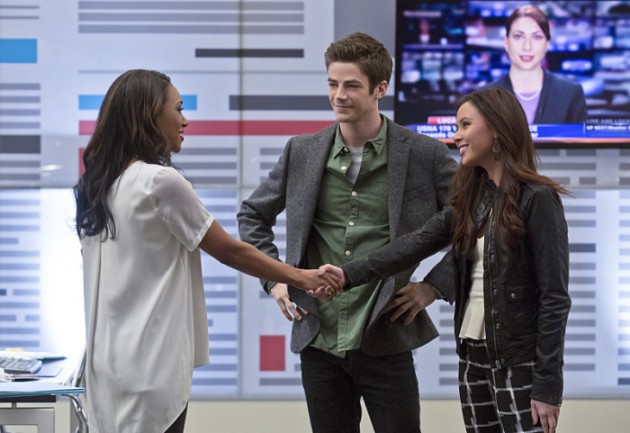 The Flash has been off to quite a great start this first season and seems to be doing all of the right things after following in Arrow‘s footsteps. There has been plenty of great villains featured, the crossover episodes, and plenty to look forward to as the first season still has a long way to go until it closes. Things are getting pretty hectic on The Flash in many ways, which is keeping it interesting to say the least. Last night’s episode, “Crazy For You,” displayed how complicated many story lines are getting, which made for a very cluttered episode that was informative, but probably the most boring episode from an action standpoint.

“Crazy For You” dealt with many things at once: Barry chasing down another metahuman, Caitlin trying to move on from Ronnie, Cisco getting more information about Firestorm from Hartley, Barry finding a new love interest…this was only half of it. The past two episodes have been very informative and helped fill in the backstory of our beloved characters some more, but they’ve failed to deliver epic standoffs with villains. There’s no problem with this because shows have to develop things outside of the action; it’s what makes them successful. However, in “Crazy For You,” it felt like a little too much at points.

I really loved seeing the personal time between Barry and Caitlin, because, as the episode pointed out, they are similar in their inability to move on from the loves of their lives. This really helps them bond on a personal level, and we finally get to see more of them outside of the lab which adds some depth to the characters rather than being scientists. The best scene of the night, by far, was when Barry and Caitlin go to a bar and sing karaoke together (showing off Grant Gustin’s Glee pipes), which even leads to Barry getting Linda Park’s (guest star Malese Jow) number.

It was also great to see Barry’s father get some screen time as well, when Joe sets up for a quick hug and chat while they are investigating the breakout at the prison. The moments between Barry, his father, and Joe are some of the best points in the show, and I love that they keep it simple and have been able to use both characters as such influential and loving father figures without any awkwardness or jealousy.

Cisco’s story was a great way to move the overall plot along and, again, gave us more insight into his character when he went on a mystery hunt with Hartley throughout in search of more answers about Firestorm. At one point, Hartley mentions that he knows Cisco viewed Wells, Caitlin, and Ronnie as his family and would do anything he can to restore the past and get them all together again if possible. Cisco is a great guy; he’s fun and laid back but also very caring about those close to him. We know he blames himself for Ronnie’s death and feels obligated to help get him back.

We also got to see Cisco kick some butt when Hartley tried to escape, and then he outsmarted the genius to keep him in check. We pretty much expected Hartley to eventually get away, which is alright, because this plot was a great way to edge the Firestorm plot along without having the actual character appear in the episode. It looks like next week will be a Firestorm-centric episode that will be pretty awesome and finally show off how powerful the character actually is.

My biggest problem with last night’s episode was its villain, Shawna Baez, a.k.a. Peek-a-Boo (played by Britne Oldford). I felt that teleportation was a neat power to experience on television, in concept, but it actually turned out pretty bland compared to everyone else’s we’ve seen so far. Shawna was a good filler villain but was probably the most boring part of the episode because she was really only there to help service the other plots. Without the villain, Barry has no reason to go to the prison and see his dad, etc. I’m not expecting a major villain each week, but I just thought Shawna was lackluster in terms of how threatening she was and her story itself.

Despite that one minor hick-up, I really loved the episode for all of its personal moments. “Crazy For You” really gave us a better look into the characters and the relationships between all of them. I love watching Barry and his team get closer and stronger each week, and it’s so nice to see that Barry has a new love interest and that Iris is going to get jealous! Above all else, the very end of the episode made this well-worth it by teasing a very major villain who will hopefully pop up more before the first season ends: GORILLA GRODD.